A SPECIAL KIND OF ZOYSIA

So - after clearing, and after beginning to plant coconut trees, the shrubby undergrowth kept coming back…fast.  A lot of time was spent chopping the damned stuff down....a lot of time we considered wasted, since there was so much other stuff to do. 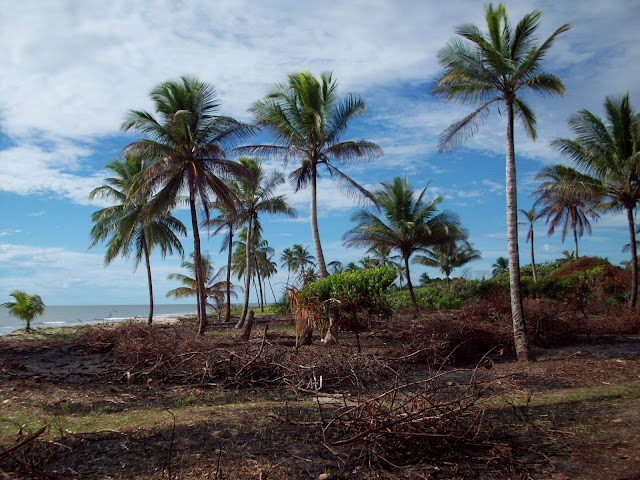 I remembered having seen a very thick grass that grows on at least one of Nicaragua’s islands. The stuff seemed to inhibit unwanted growth...where the grass grew, undergrowth didn't. The grass would be a beautiful solution to both the brush and the work problem.

Bright green, tough, and beautiful but nowhere near False Bluff. But I found a small patch in the front yard of a school in Bluefields, only eight miles away from our place - a whole lot closer than the island. And what was in the school yard had followed cracks down the retaining wall into cracks in the sidewalk…a public area.  I figured the bit of grass in the public right of way was free for the taking.  And so I did…

But the amount I considered free for the taking, truly was a ‘bit’ of grass.  I harvested enough to have made two footballs. Then I separated that into tiny pieces and planted each small piece in a box. Rather than two footballs I had two small boxes.

Once the boxed pieces had established themselves, I removed and planted each (still tiny…we’re talking just a few weeks here) on the leeward side at the base of coconut trees, old and young.  The grass has an affinity for coconut trees, massing at their bases; and the leeward position gave protection from the ever blowing breeze/wind off the sea while the grass took hold. This is how it began, one or two small plugs at a time.

A young tree gets one

(The stuff on the right side is a weed grass) 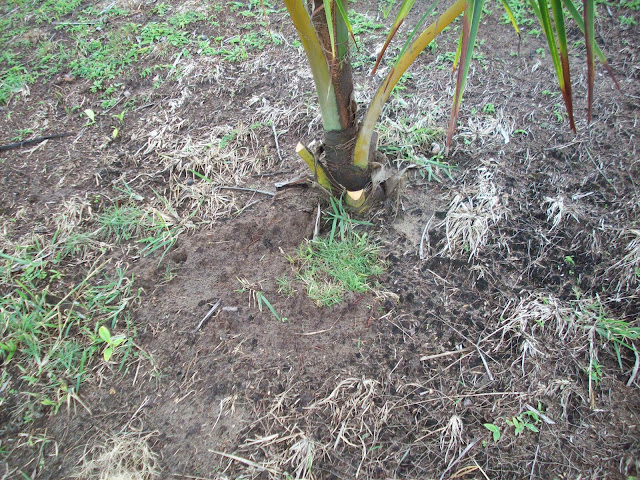 This old tree gets two 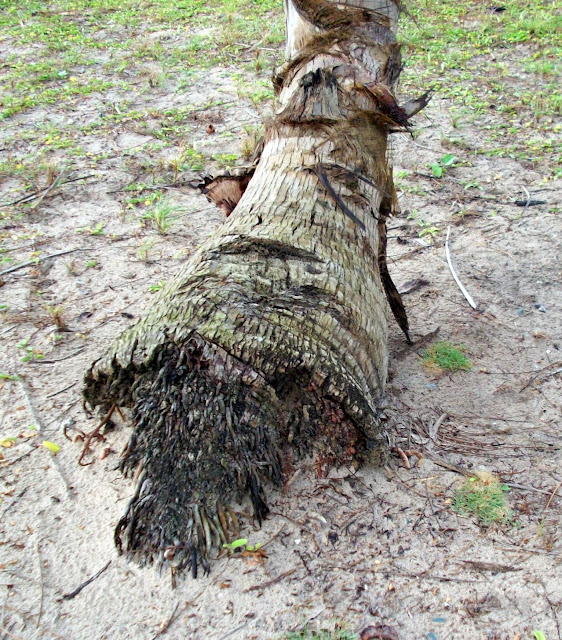 The grass grows in an interesting starburst pattern, one section extending from one tree, reaching out to knit itself with a section at the base of another tree.  (I’d never seen it at its beginning.)  As each section stabilized, we cut 4” plugs out of the more well developed turf and transplanted these plugs at the base of our increasing coconut tree plantation. 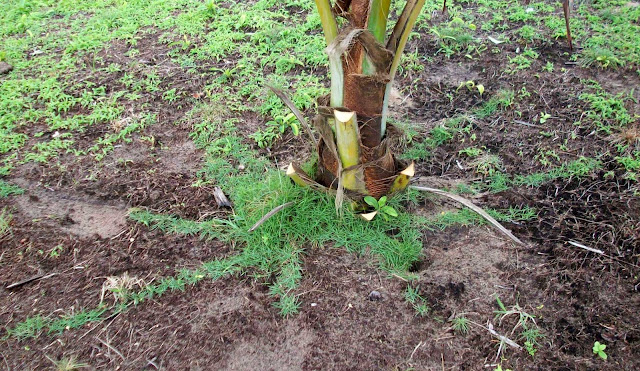 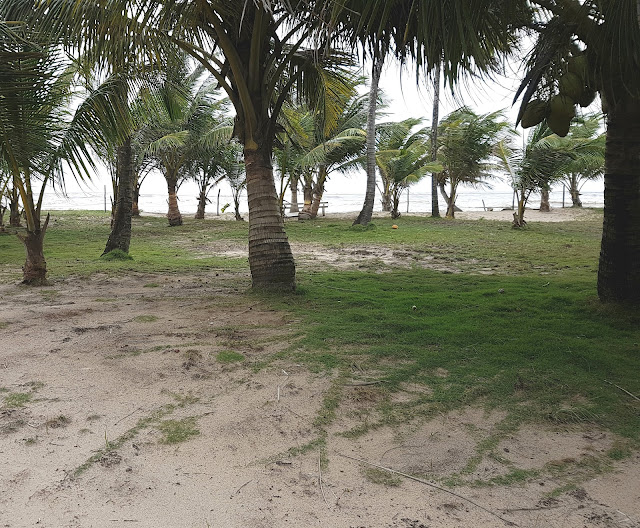 And 'knit' really does describe what the stuff does. It forms a tough mat, similar to a scrubbing pad, but it's comfortable to walk on, even barefoot.  Also it turns out the fire ants hate it, so that’s one pest gone; and snakes don’t like it, so that’s another pest gone.  Neither the ants nor the snakes can navigate through it - they have to travel over it….something they don’t do. 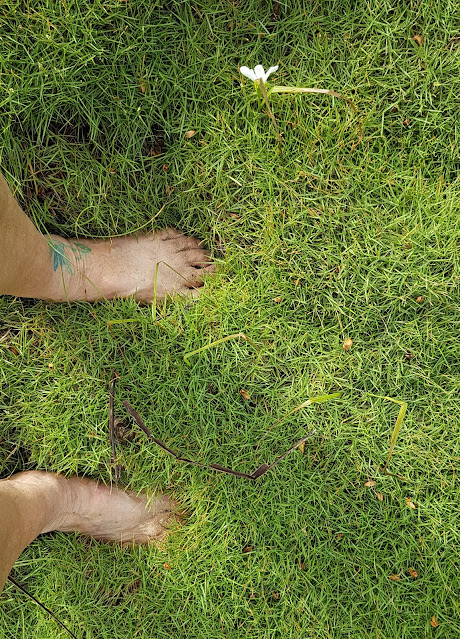 In addition to being very good at holding soil, right up to the water’s edge, it's drought resistant so that when every other low growing plant turns brown during the dry season, this stuff is so emerald green it seems to glow.

WHERE IT IS NOW 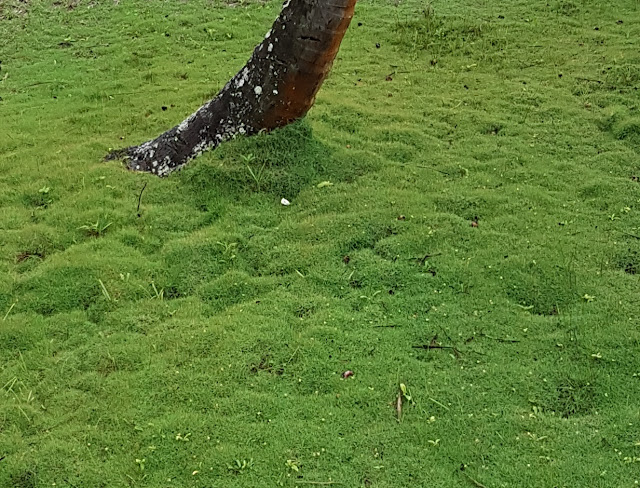 Posted by False Bluff at 5:16 PM
Email ThisBlogThis!Share to TwitterShare to FacebookShare to Pinterest

We have a sizeable piece of property on Nicaragua’s Caribbean coast.  When we first ventured there, there were old coconut trees and some sea grape plants…but mostly there was scrub so thick that moving into it was like stepping into an oven…it blocked every sea breeze.  And it was scratchy. 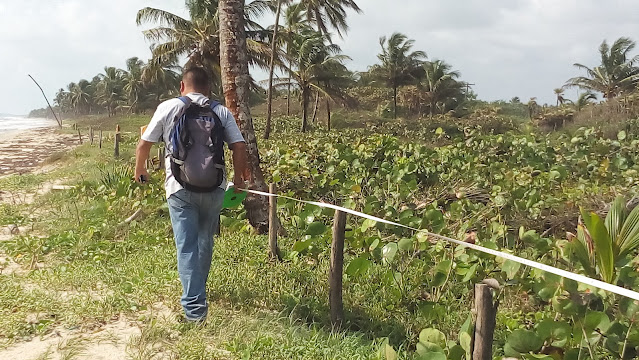 We concentrated on clearing and planting the northernmost section, something done with machetes…and very labor intensive.  Initially we planted only coconut trees.  At first we bought young trees in Bluefields, eight miles away.  But as we cleared around mature trees that were already there, those trees dropped coconuts into spaces we had cleared. And the cleared areas allowed those big seeds - coconuts - to germinate and grow.

So we began transplanting home-grown babies instead of buying plants somewhere else.  And then we set the un-sprouted coconuts in areas conducive to sprouting, supplying ourselves with a seemingly endless supply of baby trees, which we then planted.

And then those baby trees grew big enough to drop more coconuts and on and on it went…on and on it still goes. 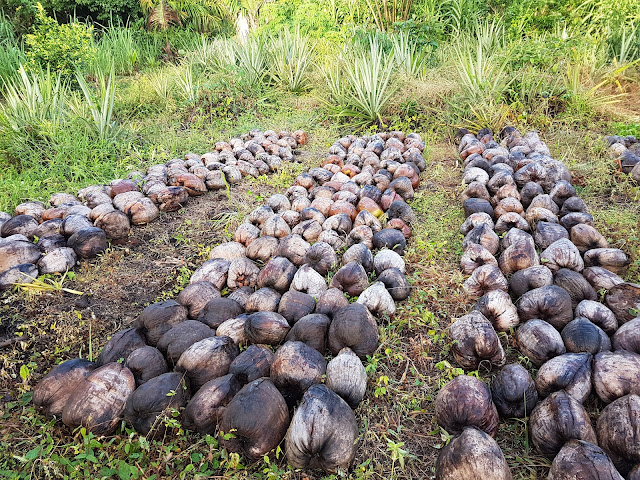 And this is what we have now. 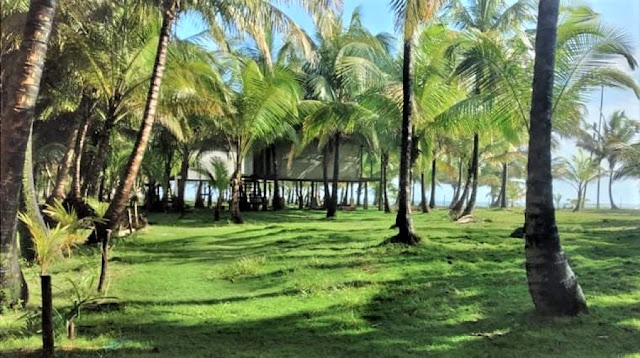