Through a fence in Bluefields

Gardens in Virginia are governed largely by the weather, as are gardens in Bluefields.
The big difference is the weather...

I don't think many Virginians would anticipate orchids blooming year 'round in the front garden. 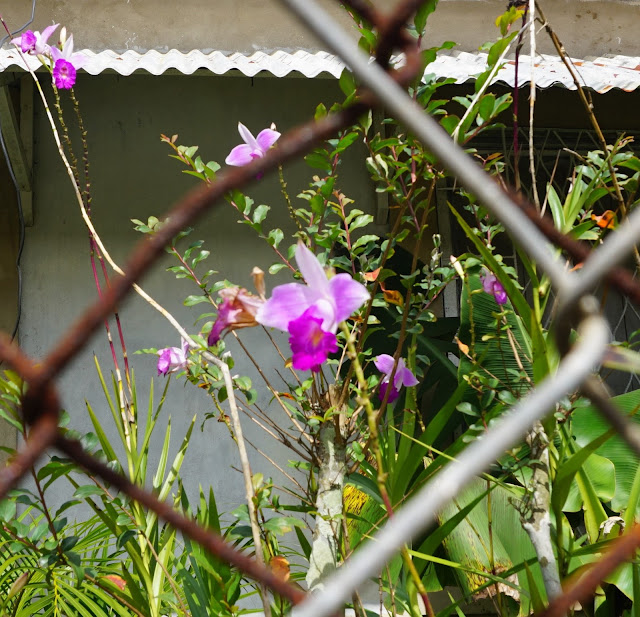 Mother's in the nursery


From Wikipedia:  "A Mother plant is a plant grown for the purpose of taking cuttings or offsets in order to grow more quantity of the same plant."
The first season after planting this rooted cutting of a very young oleander mother, she has adapted nicely to her spot in our nursery.  She will have a pale yellow blossom. 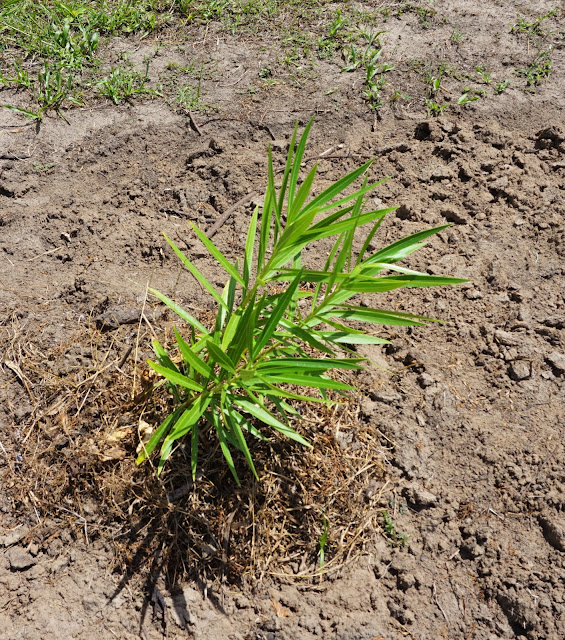 The second season shows the growth of the
plant (right side of photo).  She's tall and ungainly but.... 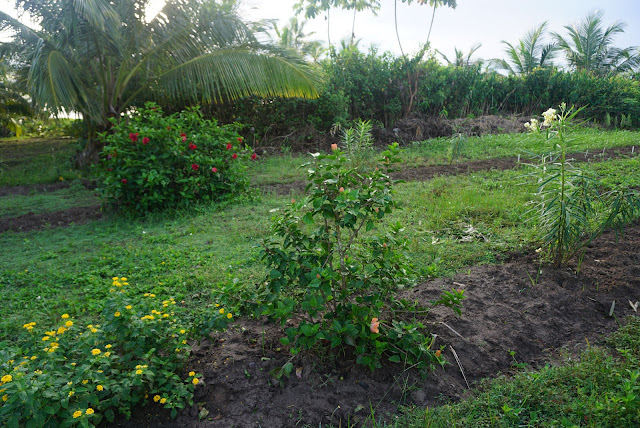 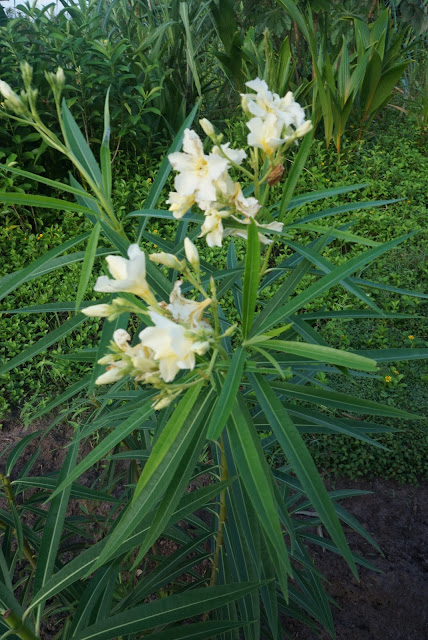 Taking cuttings from the our mother plants will not only give us additional plants to use and sell, but will help shape the plant for more propagation.
(By the way...I spent a few minutes deciding whether this post should be titled "Mother's in the nursery" or "Mothers in the nursery."  Either fits.)

The working life of a coconut palm

When a coconut tree begins to bear fruit (coconuts), it doesn't stop until it's dead.  The tree's production may differ with time, or with the weather, or with ill health.  But the tree's purpose in life is to make coconuts, whether anybody uses them or not.
This photo sums up the work that's constantly in progress, showing the stages involved in producing coconuts throughout the life of the tree - from the top, or crown, down...always.
At the highest producing point of this tree are the flowers, those sprays of yellow (another spray of flowers can be seen to the right of those bright yellow ones).
Just below the flowers are the new, small, coconuts themselves that come from the flowers (and barely visible to the left of those babies are some infant coconuts).
In the bottom tier shown are coconuts that are nearing harvest time.  In fact, some of these coconuts are ready for harvest, depending on the coconut's intended use (but that's a whole 'nother story). 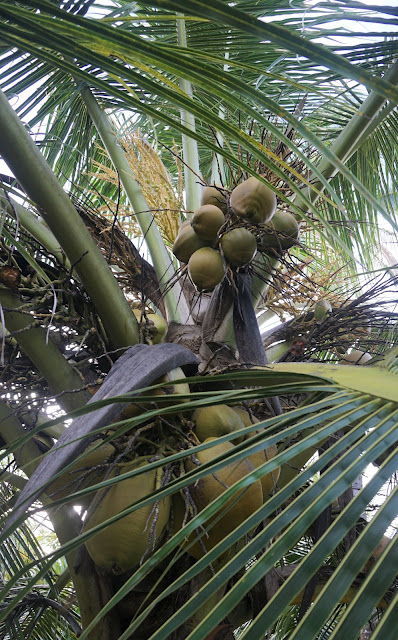 They're getting used to us

Hurricane Joan in 1988 did something hurricanes rarely do: she jumped over Central America from the Caribbean to the Pacific, getting a new name when she did so. Joan-Miriam was the final hurricane of the Atlantic hurricane season and the final named storm of the Pacific hurricane season.
And she was a real bitch by any name.
Part of the damage she did to Nicaragua was the destruction of almost all of what fed the monkeys and for decades most people in the area thought all the monkeys along Nicaragua's Caribbean coast had died, either as a result of Joan's killing winds or of starvation that followed the loss of their food sources.
I'm glad to say they didn't all die and they're making a comeback.  Here are some of our locals on one of their well traveled overhead routes...this byway across the canal not too far from the house.
It used to be that when the monkeys saw us they screamed and swung.  Not so much any more.  Now they just sort of hang out and watch what we're up to. 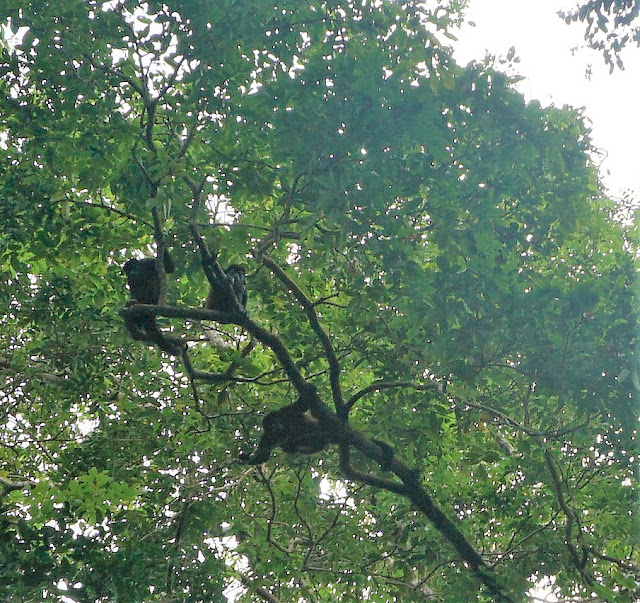 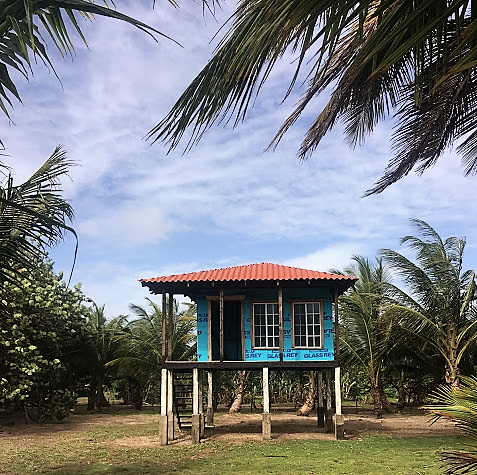 The Nest, our small library and game room, will be parged and then painted.
Shady space below for chairs and hammocks.
The Nest is much closer to the beach than our first building.
Posted by False Bluff at 3:00 AM

One of La Costena's small planes rises over Bluefields and the bay on its way to Big Corn Island, then passing over False Bluff as it heads east across the Caribbean - about 20 minutes from Bluefields to Big Island.
We can tell the approximate time of day based on the sound of La Costena's planes overhead - because they're the only planes in the sky in this part of the world.