Just like not all of the trees at False Bluff are palm trees, not all of the citrus trees at False Bluff are limes and lemons.
And not all of the citrus trees we have are mature enough to bear fruit.  Some of the trees are on the cusp...that is, they're bearing a small amount of fruit now on their way to bearing a lot of fruit in the future.  This year's crop is kind of like a dress rehearsal.
One variety had a single orange, not yet ripe; but I was told that next year the tree would be loaded.
Another variety had a small amount of fruit with the same prediction for what it would produce next year.  That particular tree bears mandarin oranges, and part of its "dress rehearsal" is shown below, not yet ripe but on the way to getting more size and a much different color. 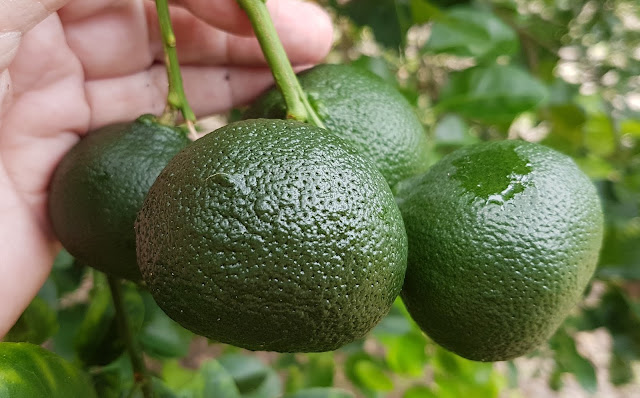 After the caulk and primer come the colors. 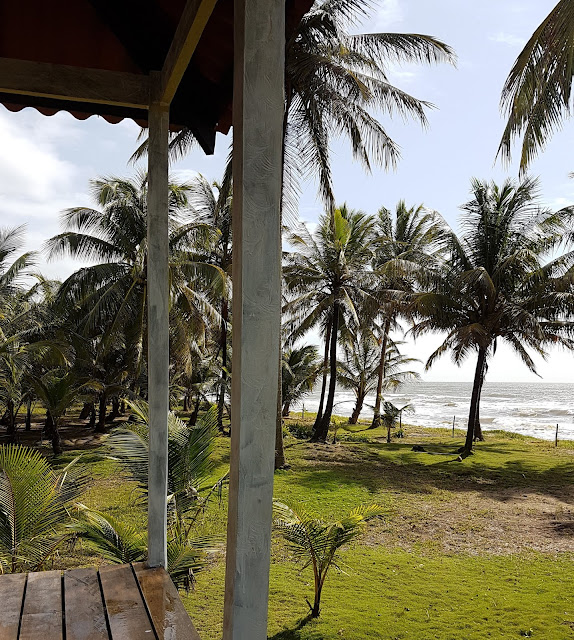 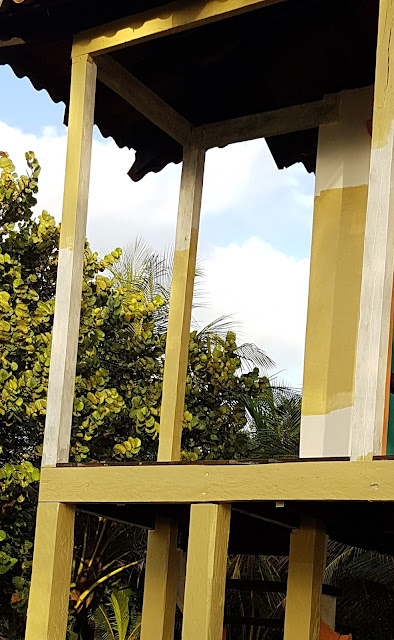 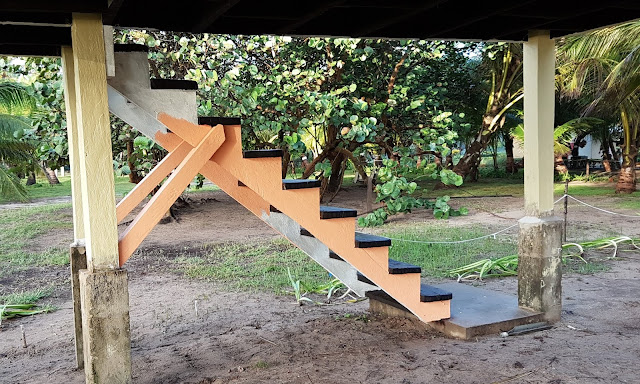 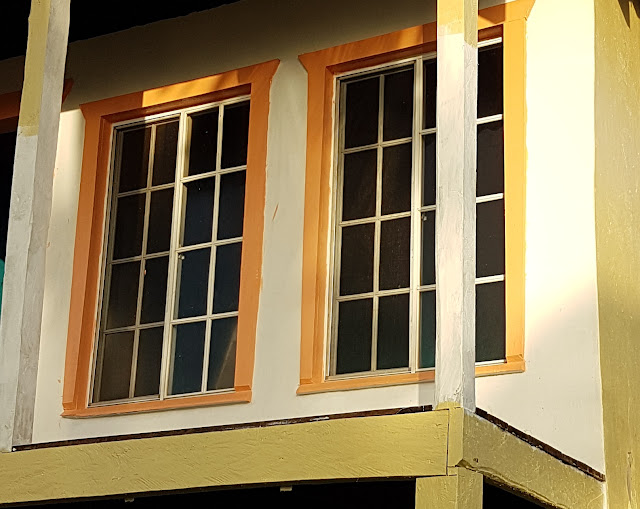 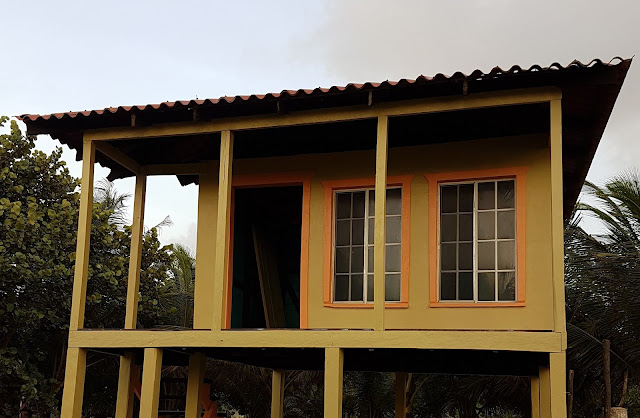 Note: The concrete portion of the support posts have since been smooth coated, polished, primed, and painted.  The ridge caps had not been installed when I took these pictures.

....but rarely get in your local grocery store, where that phrase was recently on display.
Here is a mid-morning snack of limeade and pineapple.  The limeade? Maybe not so fresh since I had snatched the limes from a tree the evening before instead of that morning.  The pineapple, however, had just been picked a few minutes before ending up in a bowl. 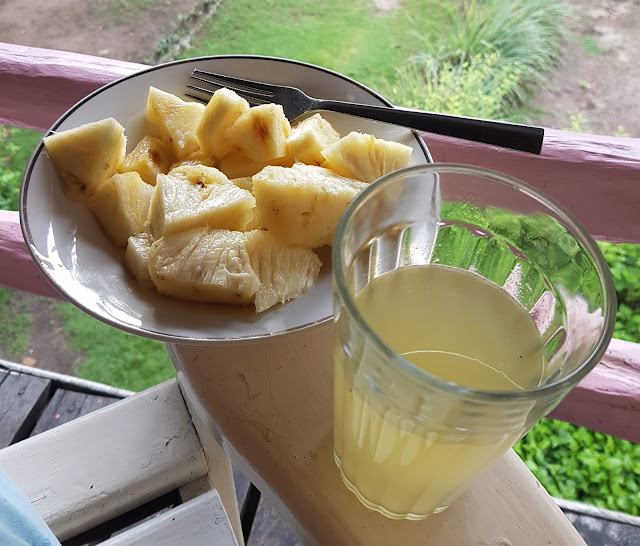 In September, 1821, Nicaragua became independent from the Spanish "Captaincy General of Guatemala," a territory that went from Costa Rica up to a part of  Mexico's Yucatan peninsula...and Nicaraguans have celebrated independence every September since.

Students all across the country join in the celebration of independence by marching, school by school; class level by class level.  They are joined by representatives of the military, the men and women charged with protecting this independence.  Regardless of recent troubles, Nicaraguans join together to celebrate who they are. 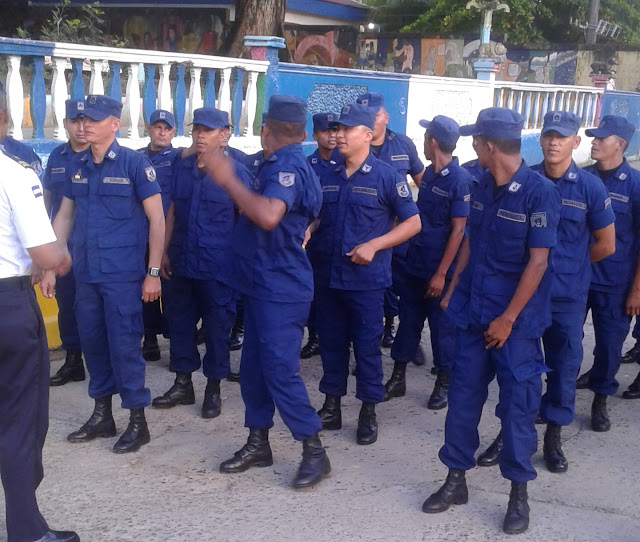 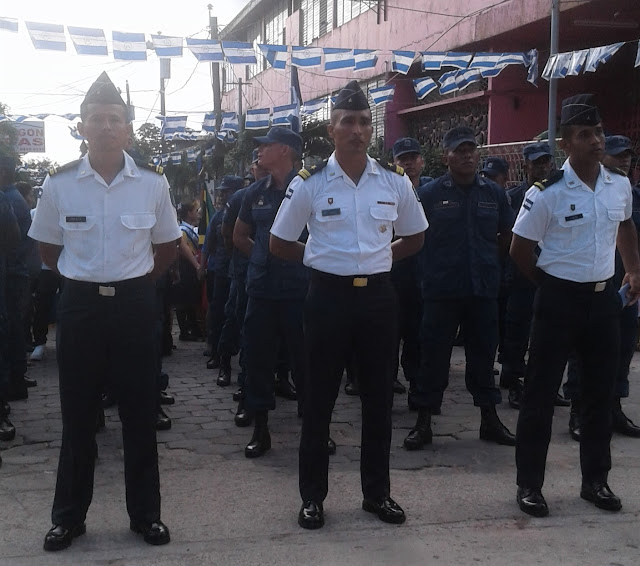 Congratulations Jose!  You earned your place in the lead.   We are so very proud of you. 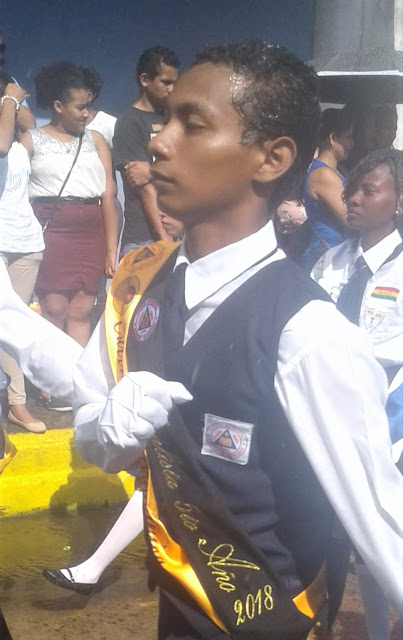 Jose sent this message with the pictures:

"As every year, Nicaragua (has) its patriotic celebrations ...
And then I always marching, but this time, God gave me a lot of...intelligence and I...go with the best students. Here are these photos ... the truth that all this I owe to God, and...this was my last year that goes."

Our nursery continues to grow

We recently increased the size of the nursery by about a third.  The expansion was needed but sad nonetheless because we had to remove three mature-but-young palm trees to get the additional space.
Shown here are two of the trees that we removed.  The third tree, already on the ground, is visible in the rear left of the picture. 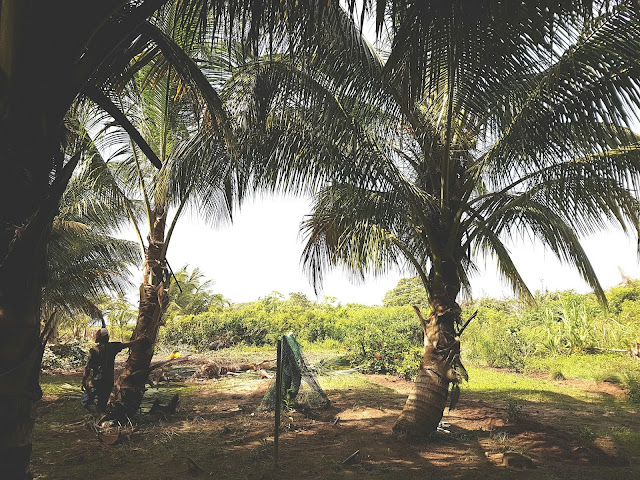 Because the trees were just at the edge of the existing nursery space - and in one instance actually in the nursery - taking them down without doing damage to our mother plants was a problem.  The fronds of a mature coconut are very long and very heavy...to say nothing of the actual trunk.  But the people I know can solve problems - each problem in probably four or five different ways.
The solution here was to remove the fronds one at a time with a machete.  Use of a machete assured that the frond removal was controlled enough so that someone could grab the tip as the frond was nearly ready to fall and control to some extent just where it would land. 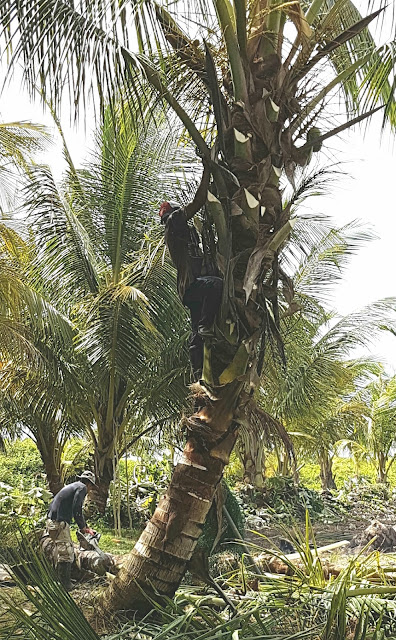 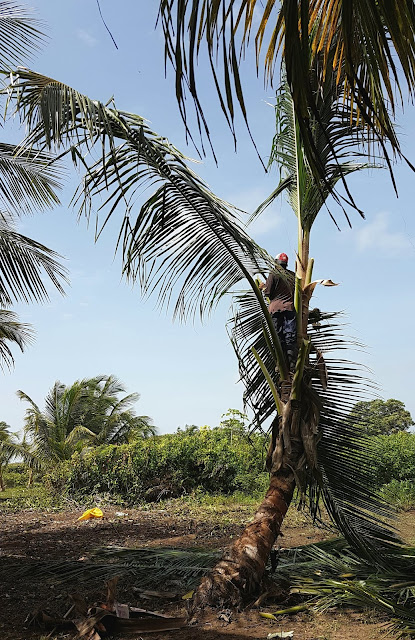 There was an audience for much of the frond-removal part of the expansion process. 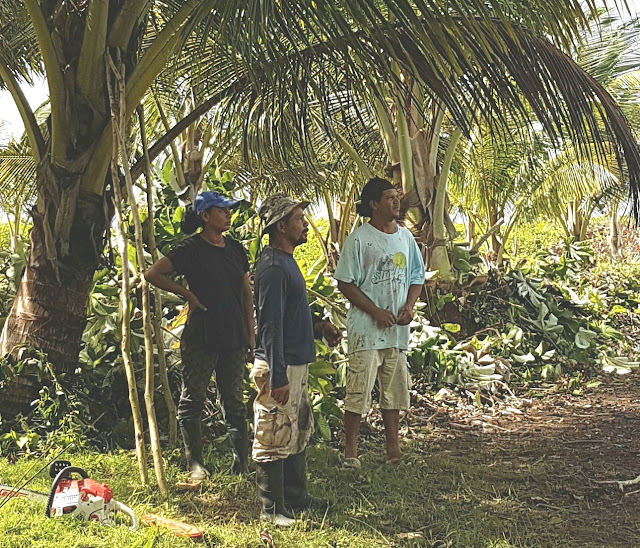 A chain saw took care of what was left of each tree and then everything was hauled to a burn pile. 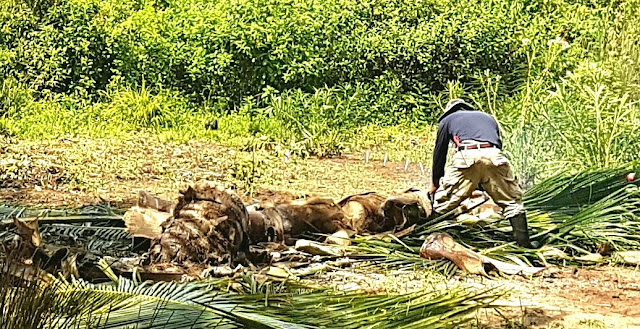 The title is self-explanatory....and when the front of a building faces east, sitting at the edge of the Caribbean, paintable silicone is cheap insurance...even when the windows are sheltered by an overhanging porch roof. 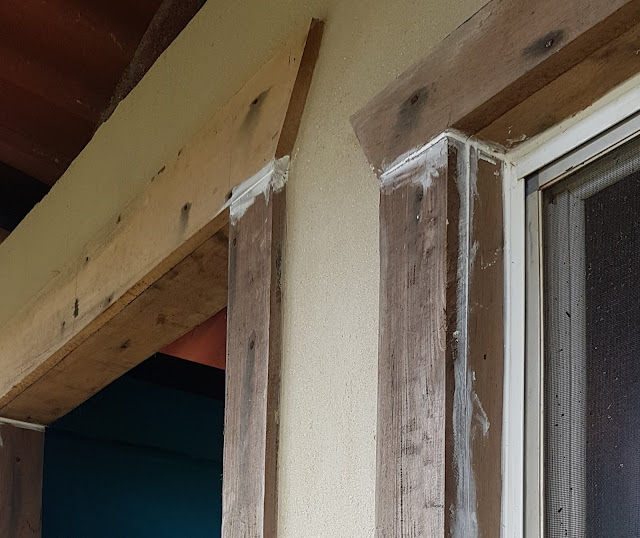 Today I almost bought limes for a fresh limeade - it takes two limes to make a really good limeade.  In the end I decided to just "walk away."  Aside from the "$0.69 each", there was the dubious claim of "Freshness."  I'll wait until I'm back at False Bluff...and it's worth the wait. 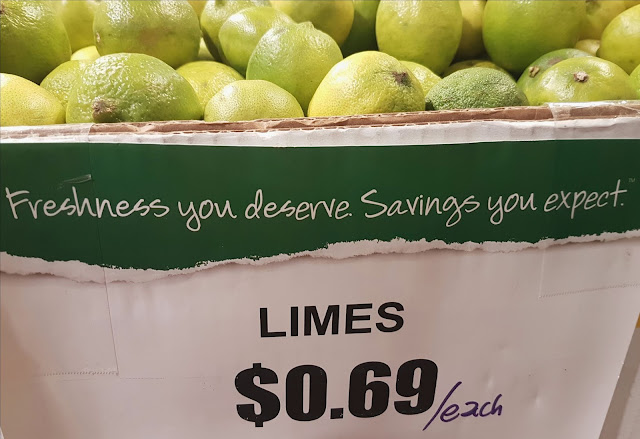 Although from the posts here you might think we only grow coconut trees, that just isn't so.
Our citrus trees are just beginning to bear, including two varieties of limes - and every day I have as many limeades as I want.  I pick the limes myself: they're not only fresh, they're free.
The lime tree below tells the story of why it's so easy to enjoy multiple limeades every day. And this is just one of several trees bearing this particular variety of lime. 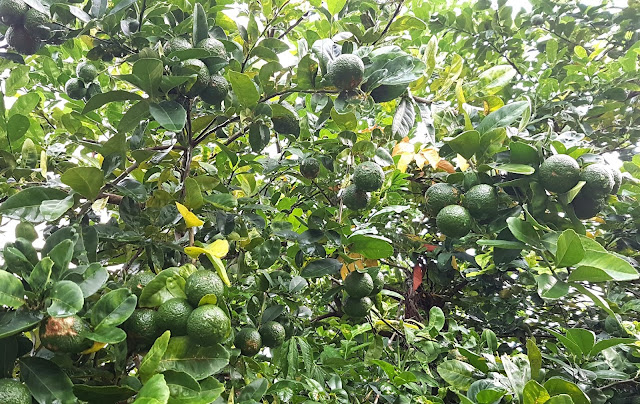 Shown here are the two types of limes (and the only lemon variety) we have bearing right now.  The lime on the left is the lime found in grocery stores in Virginia.  Its skin is smooth and its flesh is lime green.  The lime on the right, which is also the lime hanging on the branches of the tree above, does not have smooth skin and its flesh is orange.  It's called the 'toad lime' because of its rough and bumpy skin. 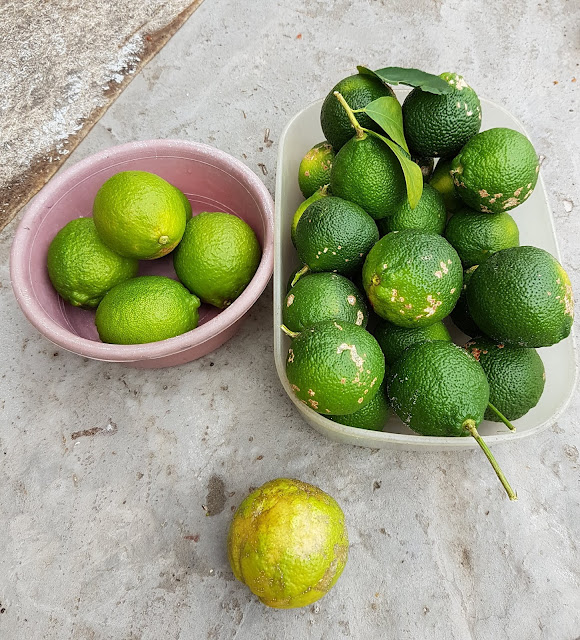 Both varieties of our limes have good limeade flavor; but the toad lime, my favorite, excels in the  flavor game. 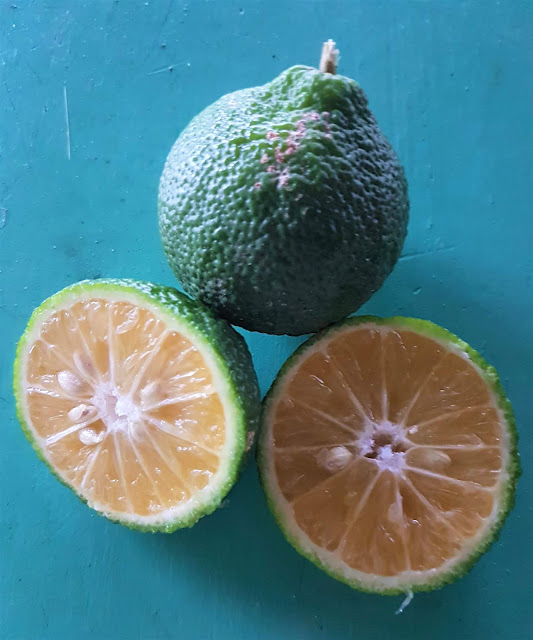 When we head to Bluefields we carry limes for family and friends...usually by the bucketful. 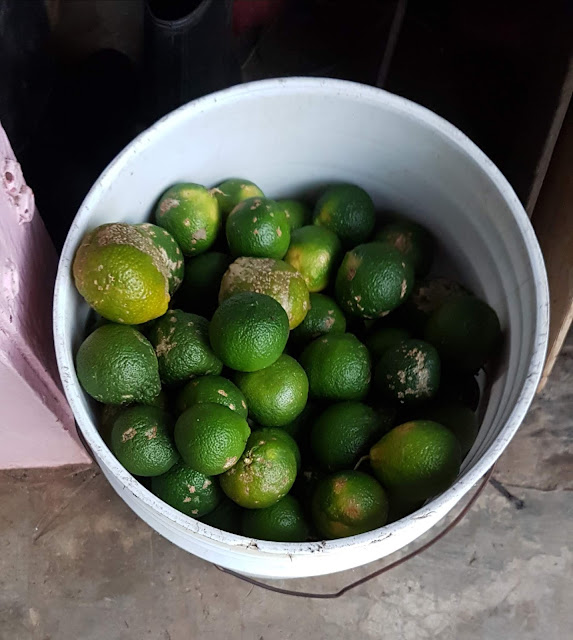