.....from the porch of El Nido.
I took this picture before the porch floor went down and it shows the incredible view of the sea from The Nest. 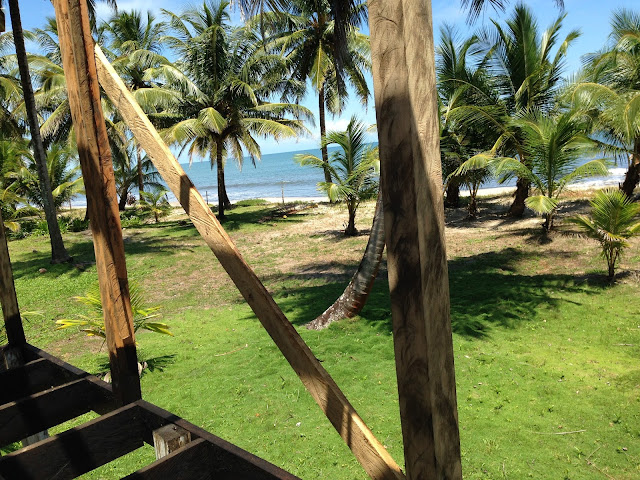 (Clearly visible is the aceite negro that has been applied to much of the wood.)
Posted by False Bluff at 7:51 AM
Email ThisBlogThis!Share to TwitterShare to FacebookShare to Pinterest

In Virginia and most of the United States we get to go to Home Depot or a similar place, pick our wood, load it and head for the job site:  2"x4"s, 1"x8"s, 2"x10"s; treated or untreated.
Those aren't choices in most of Nicaragua and for sure not in the Bluefields area.  Instead you give a list of the wood sizes you need to someone and he goes out with a chain saw and cuts your wood to order.
And then you build into your project an extra three weeks or three months for your fresh cut wood to dry - we're accustomed to kiln dried wood we can use right away. Again, that's not an option in in the Bluefields area.
This said, there is one place in Bluefields that offers a selection of wood sizes ready-cut but the wood is more costly, not planed, not treated, and not dried.
Another thing to take into consideration when using wood along the Caribbean coast is termites: there are a lot of them. Treating wood to prevent, or slow them down, is pretty critical.  And even if you build your home of block and concrete, there are wood elements as food for termites.

So a practice has developed along the Caribbean coast of treating the wood in situ, that is after it's put into place in the building.  In other words you build your house or shed or room and then apply either diesel fuel or aceite negro, (used motor oil) to all the wood.  Given the cost of diesel, black oil is what's usually applied.
So when a building goes up, a crew goes through the entire thing with throw-away containers full of oil and throw-away brushes and they coat every wood surface with used motor oil (or diesel) which termites DO NOT LIKE.
Here's Cesper, certainly our builder of choice, and part of his crew coating El Nido from the top down.  It's messy but it's a very effective treatment against termites.  Two or three weeks after the oil's applied you can paint right over it and never know that such a thing as aceite negro had ever been applied. 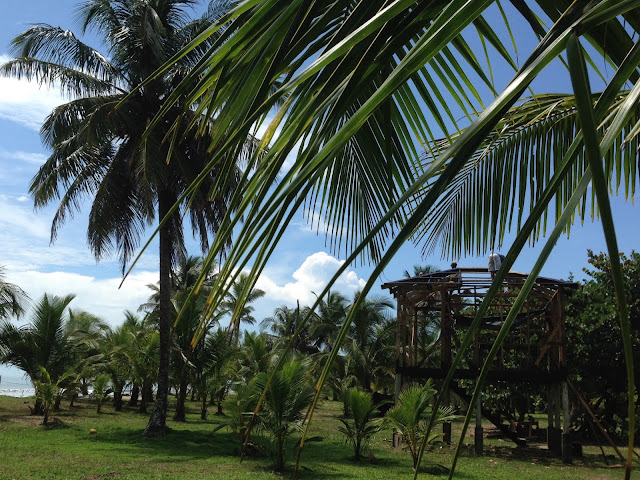 Posted by False Bluff at 8:05 AM
Email ThisBlogThis!Share to TwitterShare to FacebookShare to Pinterest

Still going strong and currently loaded with the colors of a Virginia fall: 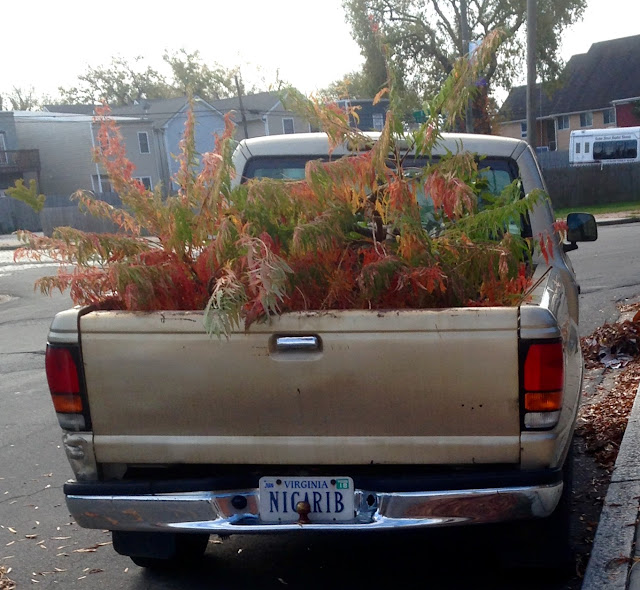 Posted by False Bluff at 6:03 AM
Email ThisBlogThis!Share to TwitterShare to FacebookShare to Pinterest

People around the world hunt with dogs, and Nicaragua is certainly no exception.  One big difference about hunting with dogs close to Nicaragua's Caribbean coast is that most of the travel to and from the hunt is done on water.
This pair of hunters, the first of whom is shown in the picture below, was on the way back to Bluefields.  Though not all visible at first, there were five dogs aboard the boat from which a rope....

.....is being used to haul the second hunter in a boat with only three dogs aboard. 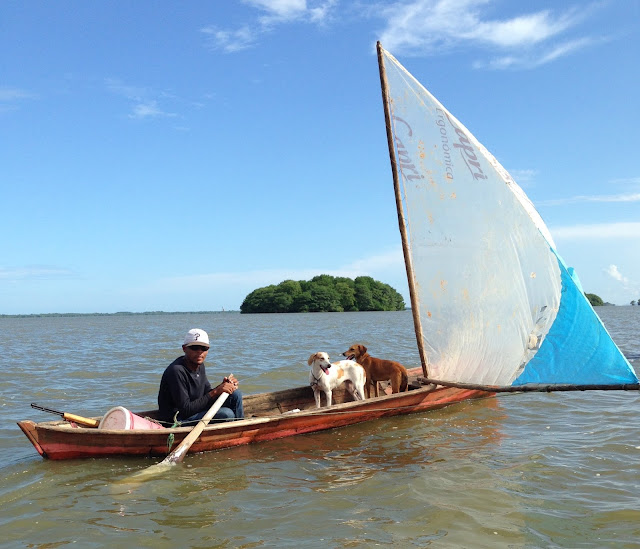 Posted by False Bluff at 3:39 AM
Email ThisBlogThis!Share to TwitterShare to FacebookShare to Pinterest

On a recent trip I carried food harvested from False Bluff in an old bag I've been using for years.  The bag sat, pretty well loaded, in the front of the boat heading to Bluefields.  Every piece of food had been harvested and in the bag just before heading toward town. 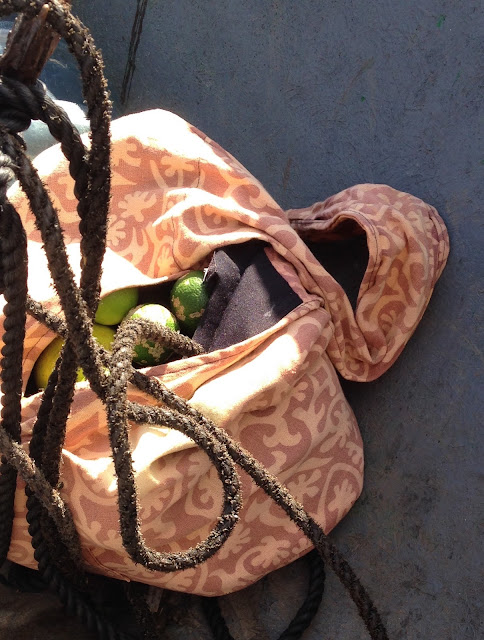 Out of the bag:
Two papaya, scored and ready to "peel and eat;" two types of limes, smooth and rough (my favorite); and some red bananas. 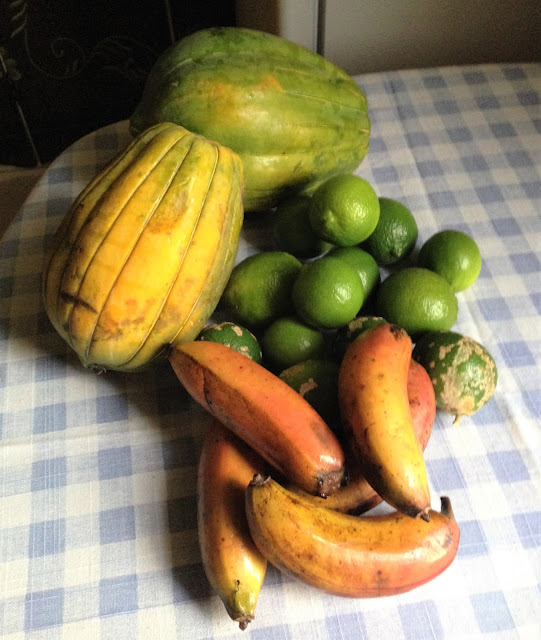 Posted by False Bluff at 3:25 AM
Email ThisBlogThis!Share to TwitterShare to FacebookShare to Pinterest

Every trip to False Bluff is a reunion - with friends who have become like family, with acquaintances who have become friends....on the beach, in boats going back and forth, in Bluefields, in Pearl Lagoon, in Kukra.
This time the reunion started at the airport.

I've been acquainted with Alexander Scott for years. Initially he was closely involved with the Bluefields Sound System, which promoted local talent and made efforts to save music that was becoming only a memory.
Xander is now with blueEnergy -       http://www.blueenergygroup.org/
I hadn't seen him in a while but there he was at the Bluefields airport, arriving only minutes after I did.  Standing around waiting for taxis, we caught up a bit and I urged him - once a frequent passer-by on his way to a farm north of us - to come out for a visit.  And happily a couple of weeks later he arrived for a picnic with his wife, his stepdaughter, some other youngsters, and some co-workers, including Guillaume Craig and his wife.
Guillaume and his brother Mathias are co-founders of blueEnergy, a group that has some success at doing things most people don't have the stamina for.  Their stated approach is: "There are no quick fixes where we work. We don't give things away.  We stick around.  We take diversity seriously."
I was going to cut and paste pictures of Xander and Guillaume...and then realized I had already posted a picture of them at False Bluff the day of the picnic - so I'm just doing a repeat: Xander to the left, Guillaume to the right. 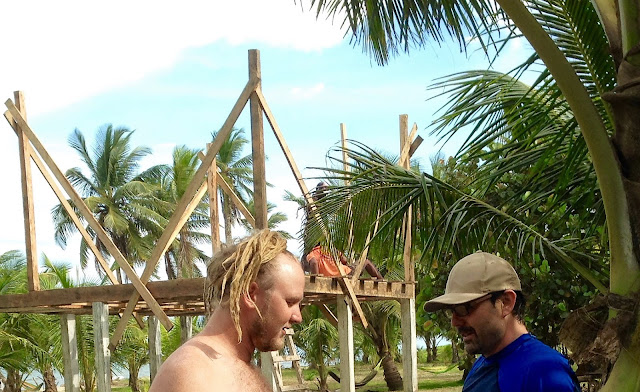 There will be more here about blueEnergy because of the group's contribution to the overall environmental health of the area in which False Bluff exists.

Posted by False Bluff at 10:06 AM
Email ThisBlogThis!Share to TwitterShare to FacebookShare to Pinterest
Newer Posts Older Posts Home
Subscribe to: Posts (Atom)