In the old days (and sooner or later they're all old) both men and women often wore something known as "mourning jewelry" to help remember their dead loved ones. This was a practice that pretty well went out of fashion when photography came into fashion...but some of the old jewelry is pretty amazing.
All sorts of materials were used and colors, such as black enamel, were important. Many of the pieces included a lock of hair from the deceased that was often braided and put behind the glass of something like a brooch or a pin or a pocket watch. I'm using bone instead of hair but I'm not using the bone in jewelry.

I've had both hips replaced over the past couple of years. Leading up to the first surgery I told the doctor I wanted the hospital to give me back what he was going to take out. He asked up the chain and was denied - and the pieces he removed were destroyed even before I could file a grievance with the hospital (the hospital and I went round and round about that a bit).
Leading up to the second surgery I tried again and was successful: the hospital said I could keep pieces of myself. I was intending to use the top of the hip bone as the top of a cane, but what pathology gave me instead were pieces sliced like cheese, only a little thicker.
There are lots of recipes online for bleaching and drying bone. Bone beads, old and new, have long been part of the jewelry business. I tried several of the recipes after I brought my spare parts home and none of them bleached or dried my bone the way the internet claimed they would...but that's the internet.
However, I ended up using some of the pieces after months of recommended 'treatments' in the form of eyes in the fish of a cane I had custom made in Bluefields - even though the pieces aren't the clear white I've seen represented in bone beads. (The post on this site about the cane is dated April 2, 2017.)
I don't use the cane. I don't need to use the cane because my hips are new. But I'm going to commission another cane on my next trip to Bluefields. I have several slices of bone left and fish eyes are small.
And when the time comes to mourn me - which I hope my kids will do for a short time - they'll each have something to remember me by. 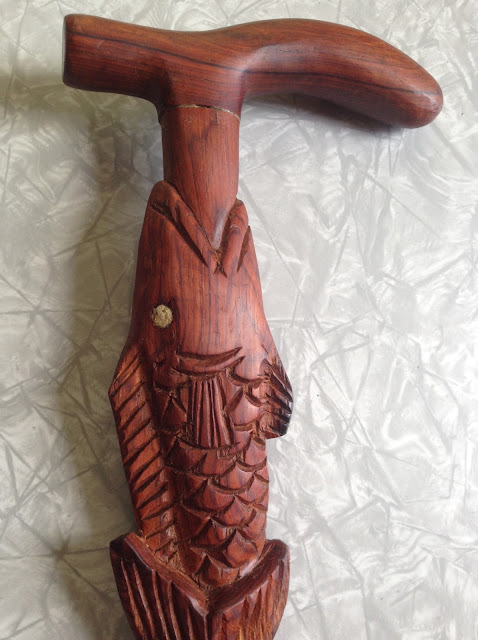 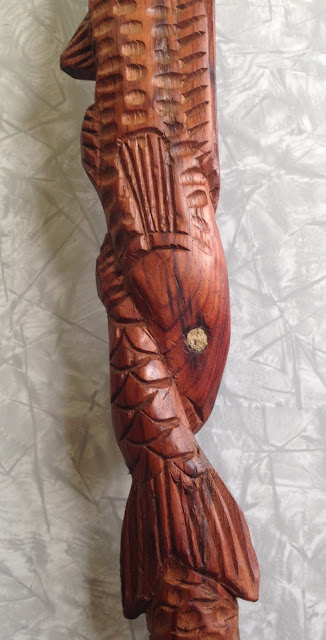 Exposed to light and air since being installed in the cane, the fish eyes are growing paler and I have to sand them periodically as they continue to dry.