Until this year I had not seen coconuts in the coconut palms, Cocos nucifera, at False Bluff.   Usually the only evidence of coconut production has been a pile of husks at the base of the tree, remnants of someone's snack; but this year, with the constant presence on False Bluff of my employees, there are coconuts to eat... 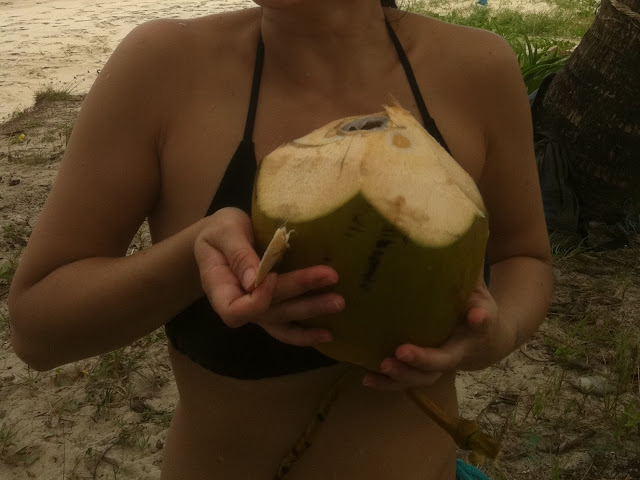 ...and coconuts to set aside for sprouting and later planting. 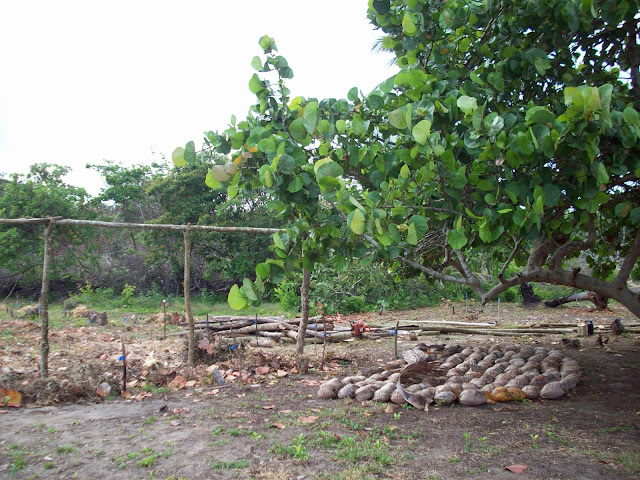 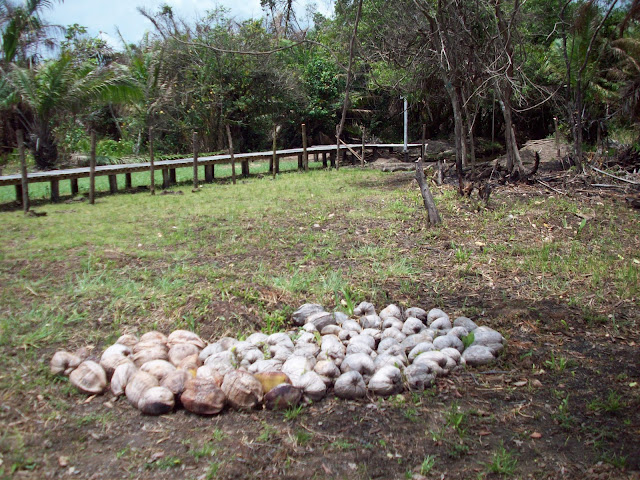 (The one in the middle-right, below, has sprouted.) 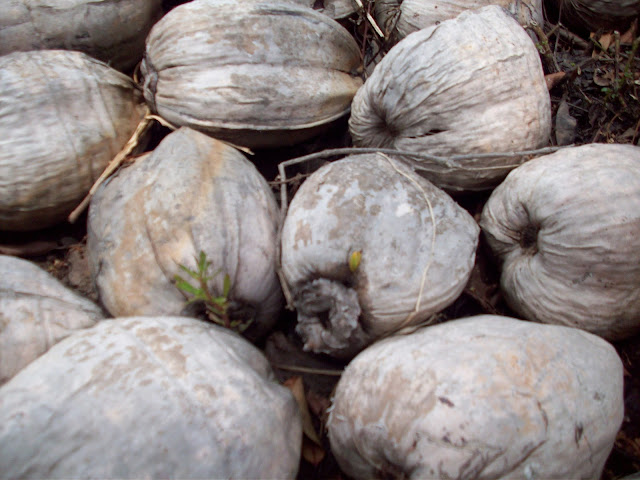 I can now write from personal experience that the sound of a coconut hitting the ground near you is just like it sounds in the movie 'Castaway.'   After having one hit near me a couple of times I changed my travel paths across the property and I sure don't sit down for a meal under one of the trees anymore.
A lot of undergrowth at False Bluff has been cleared.   Not only could you not navigate the property because of it, but the undergrowth kept the breeze from cooling you.   In fact there was so much undergrowth there was no space left to plant anything else, like a garden, or pineapples, or citrus trees.   There is now space for lots of food plants, many of which are already in the ground and some of which we're already eating. 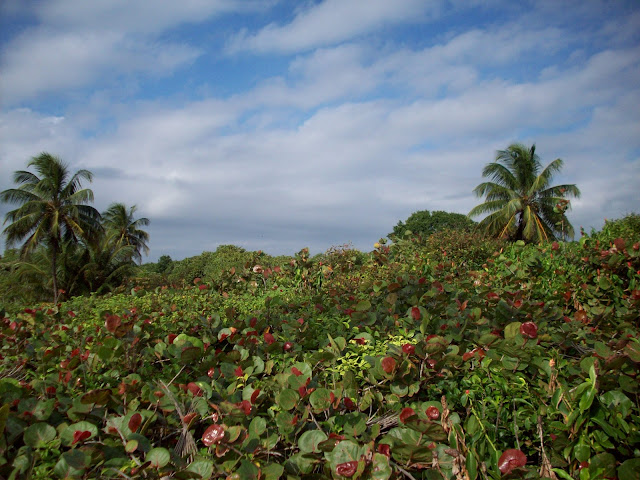 The palms at False Bluff have that universal silhouette that says 'Caribbean.' 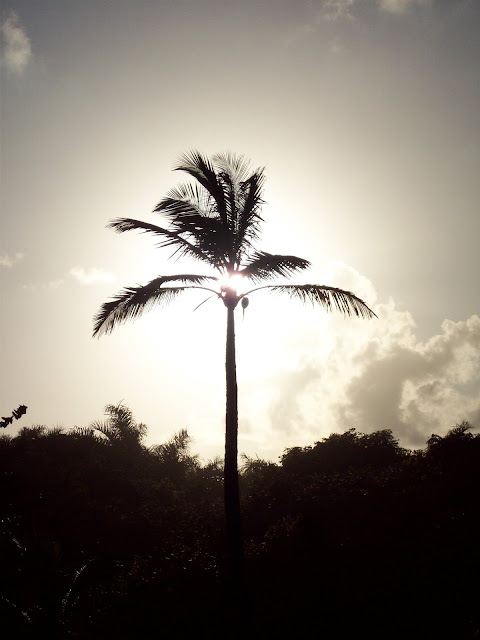 Sad to say as we cleared we found that many of the existing coconut trees are damaged or don't have good root systems. When a coconut, which is just a big seed, falls and then grows right where it falls, much of the root system is above ground and in the early years of the tree's life any wind will bend it sideways, further lessening its hold on soil and life. 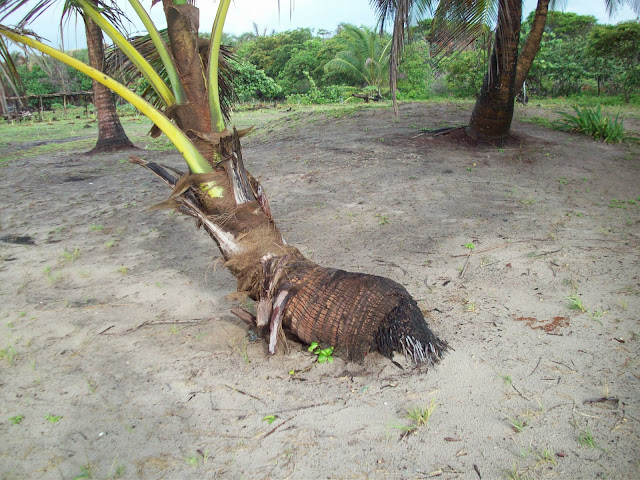 Although we didn't remove those trees as we cleared, we recognize their lives are in jeopardy.   The fact is not only did we not remove a single viable coconut tree we've planted additional trees:  more than two hundred to date with nearly a thousand more to sprout and plant. 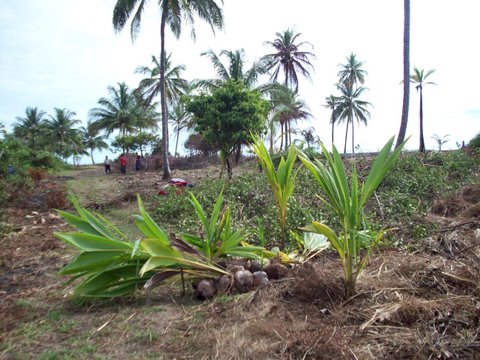 In addition to what we harvest, I bought additional coconuts for sprouting from an elderly man who watches over a farm about a half-hour north of False Bluff.   Packed into a net bag, the bag was pulled through the water parallel to the beach.   Since it wasn't possible to haul the full bag up onto the property, smaller bags were filled from the big bag and carried up from the water. 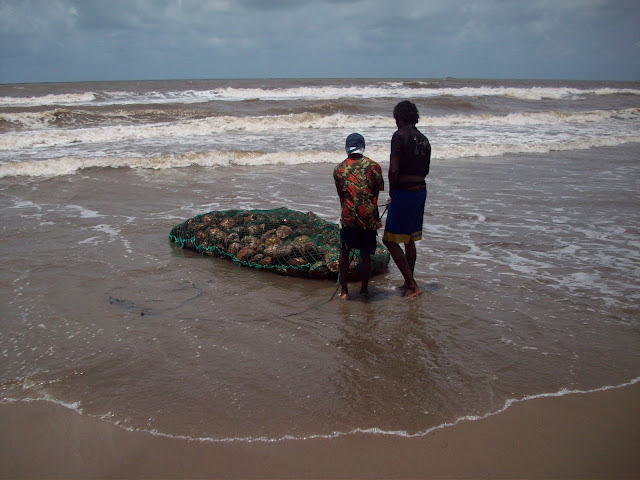 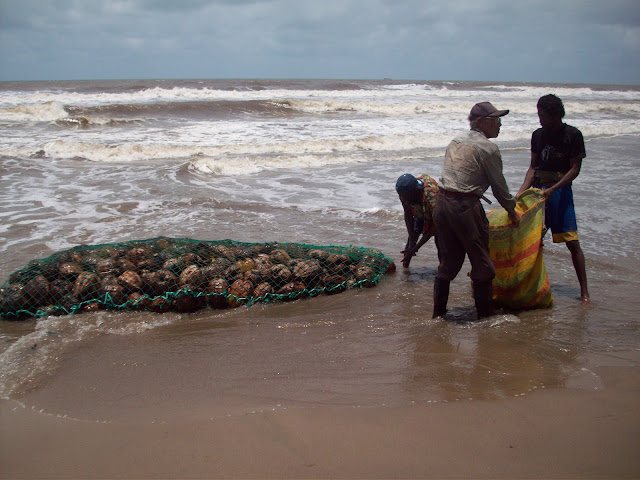 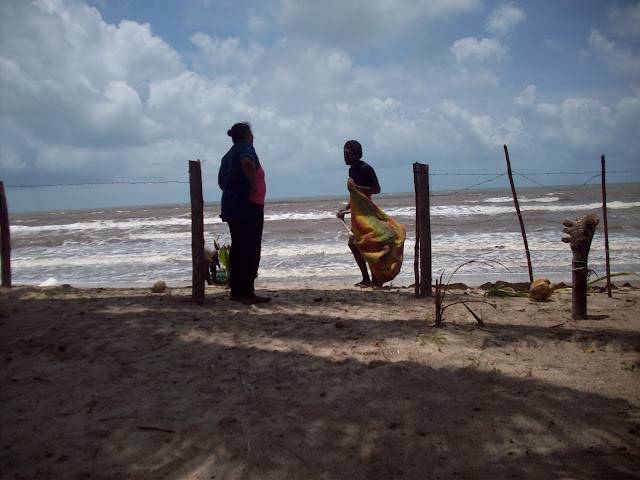