The first kind of food

Three kinds of food for humans occur at False Bluff:  grown food, caught food, and bought food.
The first kind of food takes some work, time, and agreeable weather; the second some skill and luck; and the third takes money.   Here I'm only touching on grown food, some of which happens naturally and some of which is purpose-driven.
The most useful foods that happen naturally at False Bluff are coconuts; the noni fruit or Morinda citrifolia; the grapes produced by the sea grape; and the cashew.  I grow a lot of things in Virginia and know something about most of them.  What grows along Nicaragua's Caribbean coast, however, are things I know primarily from various stores near me in Virginia.  For instance this week I'd have to give somebody more than $2.00 to walk out of a local grocery store with just one coconut.
As for the noni it's a small tree that grows in profusion at False Bluff – I might even say it grows like weeds.  Also known as a morinda tree, the fruit of the noni tree is reputed to have many beneficial medicinal qualities.   Both the plant, which is a small shrubby tree, and the fruit are....unattractive.   Despite the fact that noni fruit derivatives in health food stores are usually expensive, where I've been in Nicaragua it's common to see the fruit rotting on the ground.   Plucked white-ripe, small slices of the firm fruit have an ascerbic apple-like flavor.
I've seen small unripe clusters of sea grape grapes but haven't tasted them. I'm told they're good.

Then there's the cashew.

At False Bluff there are even more of these trees than there are of the noni.   I still am a bit amazed that cashews just grow wild at False Bluff.   Given the price of cashew nuts at home that's like money growing on trees.
The only way I can tell the cashew varieties apart is by the color of the fruit - and the nut is not the fruit.   The nut, also called maranon, is almost an accessory to the actual fruit which is called a cashew apple.   The cashew apple, whether red or yellow, is delicious for eating right off the tree or for turning into juice.   The skin of the cashew apple is so fragile that the fruit doesn't travel well.   So, if I had not gone into the cashew-tree world I wouldn't have known there was anything but the nut, but that's all that most of us know about cashews anyway.
As for the purpose-driven, we've planted lots of food:  dasheen (taro), cassava, sugar cane, pineapple, banana, rice, beans, corn, various other vegetables and some herbs.   So far the herbs are those that are good for tea, like lemon grass (shown below). 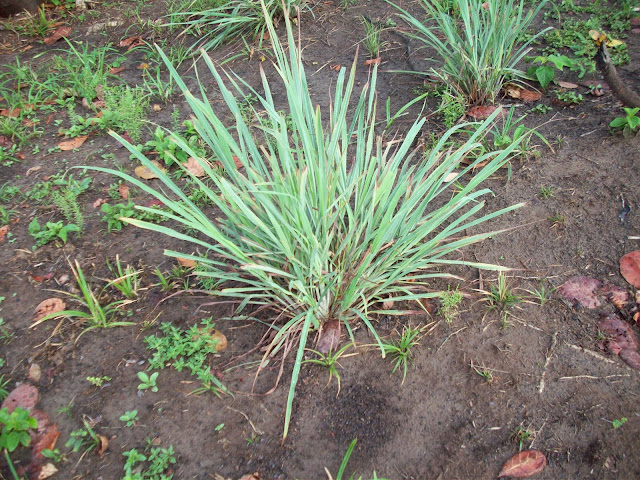 But the most impressive food growing at False Bluff is cassava, formally the manihot esculenta.   Cassava has many common names including yuca (one 'c') and tapioca.
Cassava roots grow just below the surface of the soil and radiate around one or more stems that grow straight up.   Unpeeled, cassava roots looks something like really long sweet potatoes;  peeled, however, the flesh is white and can be cooked in lots of ways.  It can be cooked in most ways you'd cook a potato:  mashed, fried, or made into a salad.   Some cooks can also turn the root into a sweet moist cake.
I'm probably not the only person familiar with the plant who thinks that, along with some protein, it could feed the world.   We planted cassava in late November and by May we were harvesting and eating the roots...and what roots they were, some as long as four feet!   We got two good meals from this plant. 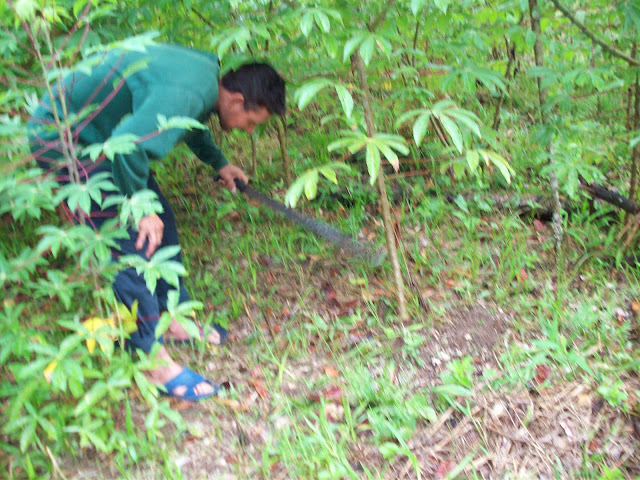 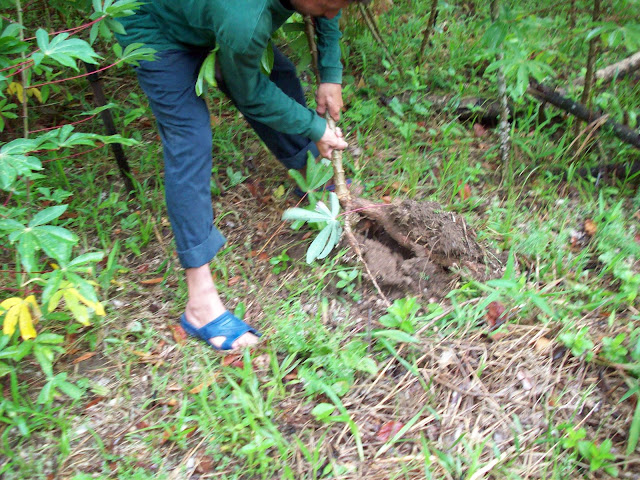 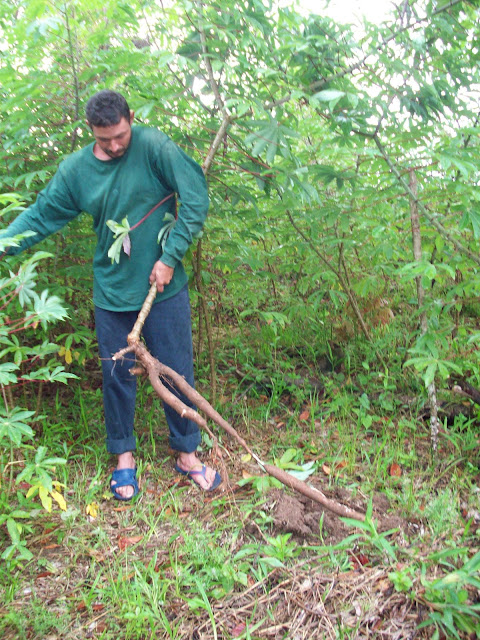 Cassava is quick to mature, easy to harvest, and easy to replant.  Once the edible roots are removed from around the base of the stems, the leaves are stripped from the plant and the stems are then cut into pieces, each eight to ten inches long.  Drop each piece of stem into a shallow hole, cover it (most people just shove dirt over the stem piece by foot - saves all that bending over), and wait six or seven months.   So, not only do you get a meal or two from each harvested plant, but you've got the potential to get ten to fifteen new plants from each harvested plant.

Cassava and fish about ready to cook. 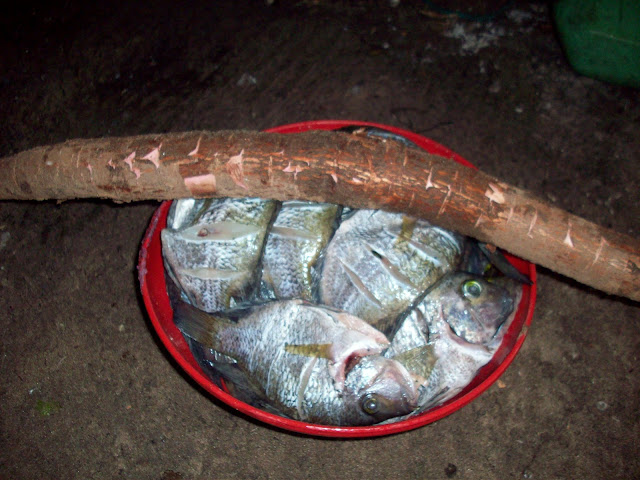