The canal was finally open


It's so easy to write that the canal was finally open, but there was nothing easy about it.   We learned early that the canal could not be opened with a dredge, not even with the small dredge that seems to be the only one available in Bluefields.   The head of the canal would be about 1000 feet west of, and slightly down-slope from, the beach...just where the swampy wet ends as the land rises up.   For more than a hundred years at least, the canal had narrowed as the trees along its edge had taken over, the most invasive being the mangroves.   The mangrove trees wove themselves together as their roots dug into the water and mud, roots of one tree meshing with the roots of another, forming a dense thicket. This thicket of roots just below the water's surface could be traveled over once the crevices and spaces between the roots had been filled with decades of rotted vegetation-turned-mud.
'Traveled over' because it wasn't as though you could walk over it:  in it, through it...but not over it.   Hidden crevices of deep mud between roots sucked rubber boots right off your feet.   For generations this is what people have traveled through to reach the beach at False Bluff and their properties, north or south (although some have walked the long miles up the beach from El Bluff, rarely with a load of supplies).   A woman who is building a house near my apartment in Bluefields told me that when she was growing up in Bluefields her school class would go on field trips to the beach at False Bluff for a picnic and swimming; and that even then everybody traveled through the swamp to get there.
Once some years ago during a camping trip to False Bluff with my sons a family who owns property north of mine came through with supplies for their farm:  chickens, bags of household goods, and food for the weekend.   Traveling with them was another property owner who carried seedlings to plant at his farm and a young breadfruit tree sapling that must have been nearly four feet tall.   Each person had carried something through the swamp.
Another part of the equation for people visiting their properties was the security of whatever boat they had traveled in, tied to a tree a half mile behind them.   Would it and everything in it still be there when they got back to it – gas, engine, oars, sails?   So usually people visited along this stretch of coast by catching a boat ride with someone going their way, or hiring a ride out; someone who would just drop them and all their stuff off in the swamp - as far up the canal as the boat could get, which wasn't very far.
So, here is this potential canal curving through the jungle and nearly swallowed whole by tree roots that have woven themselves into an impenetrable mass.   How to open it enough to allow easier access for me and other property owners?

Thirteen men and a crew chief began to work just inside the canal close to where it meets Smokey Lane Lagoon. 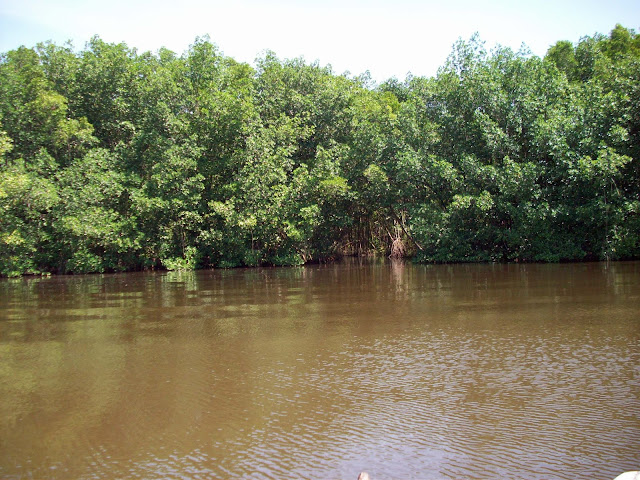 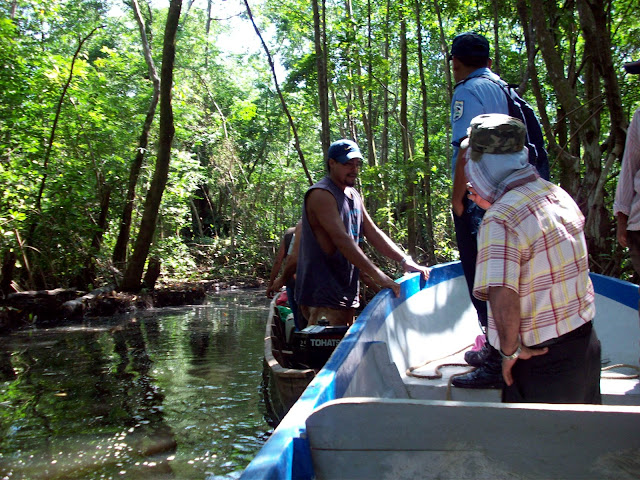 When they began this project they were a good half mile from the dock that some of them had built earlier and from the beach.   They made camp in the swamp along the canal's edge burning termite hives to keep the bugs away.   As work progressed and they got closer to the beach than to the lagoon, they moved their camp onto the pier which at that time was a useless appendage to the also useless dock.   There they built plastic-tent city that got them off the wet ground, immediately making use of both pier and dock. 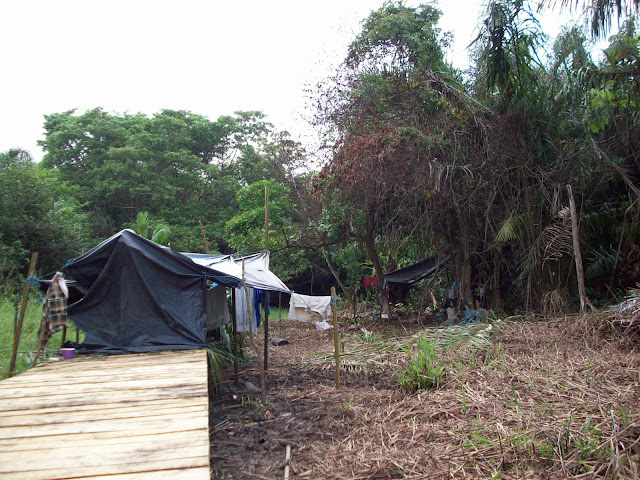 The crew lived at False Bluff during the months it took to open the canal, returning to Bluefields once a week for down time.   The crew chief made more frequent trips to Bluefields in order to replace tools which broke with alarming frequency.   Men would cut sections of underwater, interwoven tree roots into 'manageable' chunks, each wet chunk weighing 200 to 300 pounds.   Here's the crew chief with a good example of what was being removed in order to open the canal to boat traffic. 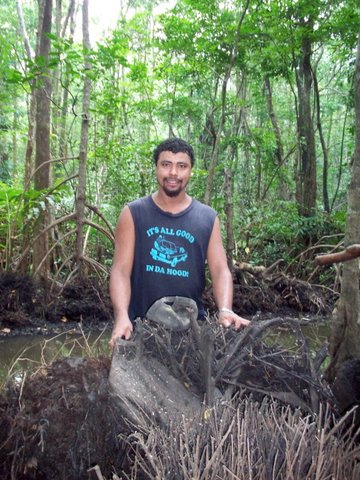 These chunks were then winched out of the sucking mud with a block and tackle and set out of the way of the work being done. 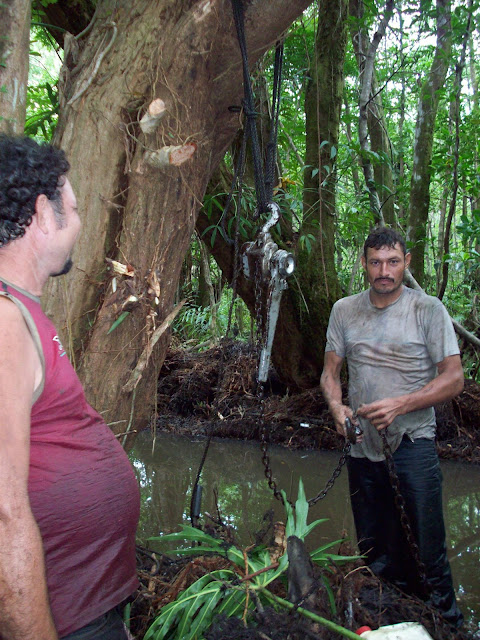 The chunks were dug out with something that looks like a long metal chisel at the end of a long handle.   These are actually fairly common tools locally; but the typical wooden handle wasn't up to the demands of the work being done on the canal.   The crew chief carried broken tools to Bluefields and had the chisel ends welded to metal handles.   Even these broke, but not as quickly.   After the roots were cut out and removed, the canal was deepened by digging out bottom muck with shovels. 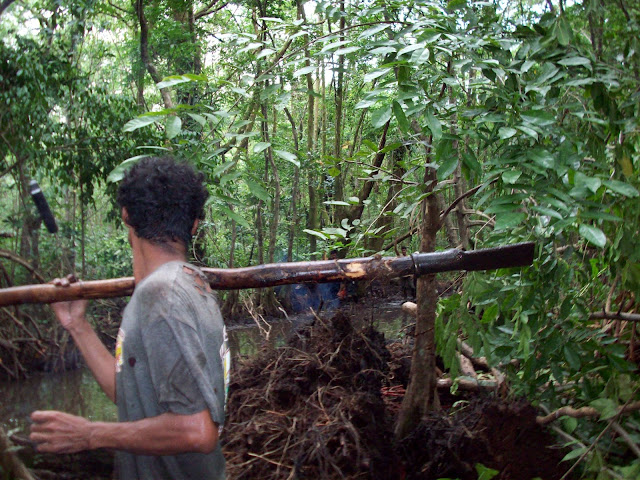 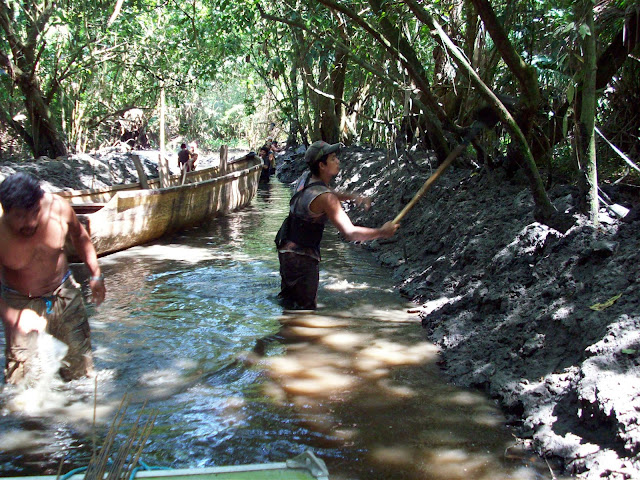 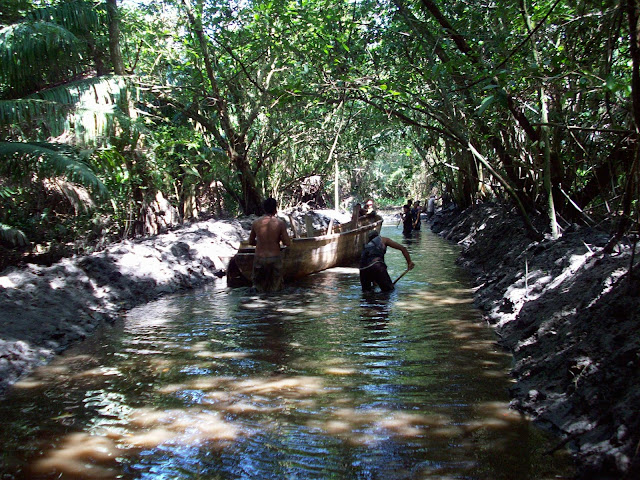 After a couple of months the families of the crew members began to join them at the job site, especially now that the men were no longer camping in the swamp.  The crew had dug themselves a well.   Only a hole in the ground, the water was clear and sweet.   Wives did laundry and cooked meals; and children and household pets swarmed everywhere.   The work was exhausting but after the families had joined the mix each work day ended with an almost festive air.
Long months and nearing the end of the project. Boredom set in and the day-by-day sameness of the work began to slow things down so the crew chief initiated an incentive plan:  open 20 meters a day.   If you finished the 20 meters by 10 o'clock in the morning, the rest of the day is yours to do with as you like; if you're still working on the 20 meters when it turns dark, he'd supply the flashlights. Needless to say nobody worked until dark and the creek continued to open toward the dock (during this last bit most of the men were fishing by noon).
Right after I got the boat registered I asked the crew chief if he wanted to take the Calala (the name of the boat) on its maiden voyage. Since all the work he was overseeing and doing was being done to accommodate my pontoon boat, shouldn't he make sure the effort was doing that?   He, his crew, and a week's worth of groceries made the trip, getting more than half-way up the canal, which is as far up as the canal had been opened at that time.   (I'd like to have been along for the ride because I understand the trip was a bit of a party.   In retrospect that makes perfect sense since where I live a synonym for pontoon boat is 'party boat.')   Not only did these guys get the first trip on the boat but they also experienced the results of all their hard work.   After leaving the men and supplies at False Bluff the crew chief returned to Bluefields, excited to report that everything we hoped was happening was happening.
The canal project wouldn't have taken anywhere near the time and effort it did had we not all been careful to do as little damage to the environment as possible.   We followed natural twists and turns dictated by the location of big old trees, thus lengthening not only the work involved but also the length of the trip a boat would have to take to get to the dock.   The end result is beautiful and the trip in itself is an event.   Wherever possible we left big trees 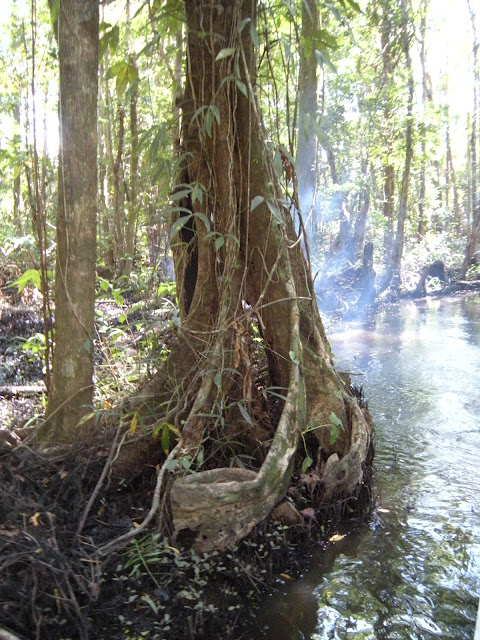 ...and the men were even careful not to disturb orchids that had attached themselves to trees along the way, some at eye level. 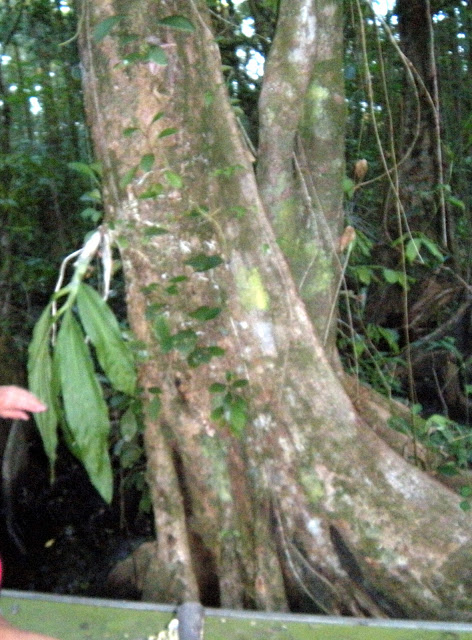 Finally the crew could see the dock while they worked: the job was nearly done.   In the final calculation, this crew of fourteen men had opened more than a half mile of canal by hand.   For those who, like I, have heard stories about how difficult it is to make things happen in Nicaragua, I say that is not only not true but insulting as well.
While the canal was being opened, each trip to False Bluff took the boat a little closer to the dock that had been finished and waiting for months.   Each trip required less and less of a slog through the swamp.   One day the boat bumped up against the dock and we stepped onto its dry surface. 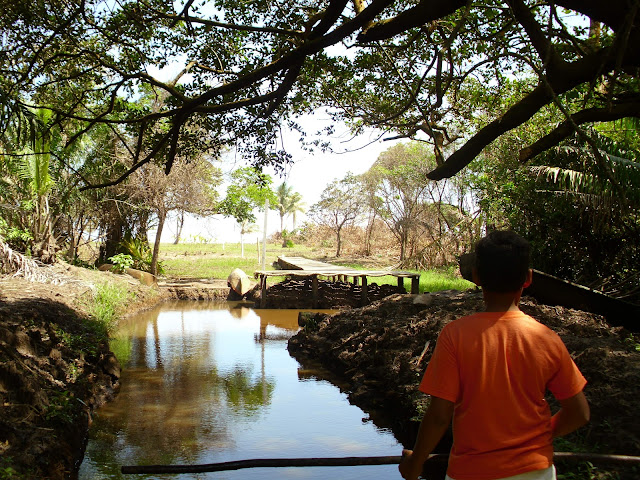 Opening the canal has been of benefit to more people than just me.  Those who routinely traveled to their farms with great discomfort do so now with ease.   The man who years ago slogged through the swamp with a breadfruit sapling now brings his children and stops at False Bluff for a visit and to catch up on the news. 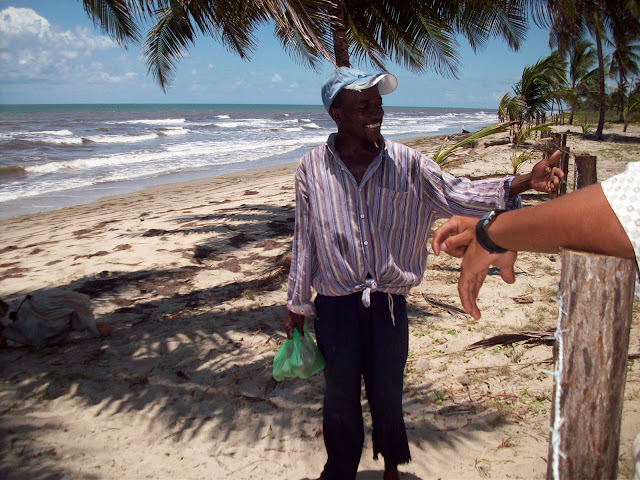 I have been told that many people who own property along this stretch of the Caribbean coast had almost abandoned their properties because of the difficulty of traveling to them.   The trip isn't difficult any more.   Here is one of my employees in the canal with a new 'errand' boat. 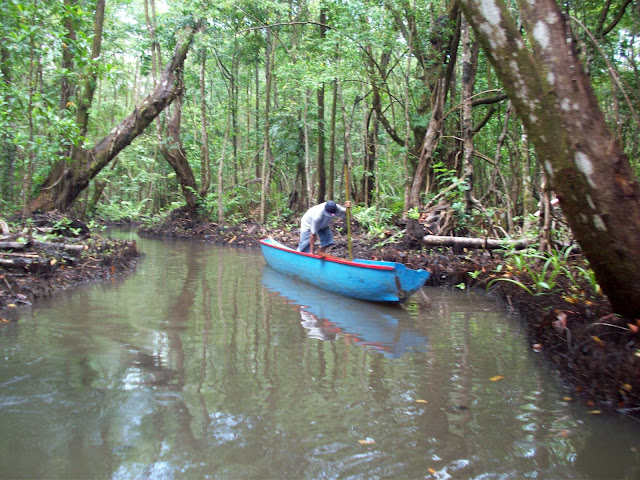 Now people who've not been out to the beach for a long time are returning...to visit, to work, to clear land.   One of my neighbors stopped by after tying up the boat to introduced me to her grown son: he was making his first visit to the family's property.
Posted by False Bluff at 10:10 PM
Email ThisBlogThis!Share to TwitterShare to FacebookShare to Pinterest
Newer Post Older Post Home