COVID testing...but only in Managua

Although this requirement seems to have been suspended to re-enter the United States  - hopefully forever - I was required to have a negative test in order to board my flight home at the end of my latest trip.

Managua is the only place in the country where covid testing is done.  But the negative effects of the testing requirement have been catastrophic to Nicaragua's tourism and that would probably have been true regardless of where your testing was done.  Imagine your test results were positive - what do you do about your flight, a hotel, a doctor, a hospital stay, re-booking, re-testing.  The cost of the tests alone were/are high, particularly for a PCR which may still be required for re-entry by some countries.

To have testing only available in Managua might have been somewhat understandable when a PCR was required; but by the time I cycled through, only a rapid test was on the menu and those are quick and easy.  The person 'conducting' the tests, and those being tested, were in contact by phone with 'applicable government authorities.'

There is at least one big formal place in Managua where testing is done and the stories of high prices and delays and confusion there have become the stuff of legend among people who only wanted to go home.

However, a friend in Managua dug up information for me about a much less expensive and much more relaxed testing site...fully approved by those 'applicable authorities.'  And so off we went to a small shop which was, as is often the case throughout Nicaragua, in the front part of a private home. 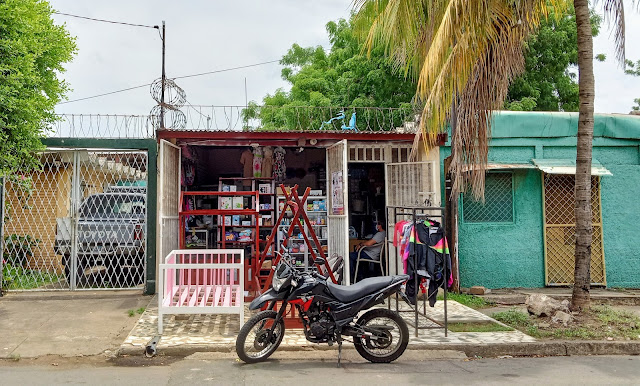 These sorts of commercial enterprises can be found all over the country...sometimes even restaurants. The sales or restaurant seating areas occupy the front room(s) of the home. Saves on rent, saves on commuting time. There was limited seating in this one and another couple came in right behind me and my friend. While we waited, all of us, including the woman conducting the test and her helper/daughter, chatted as best we could. A highlight of the visit were the bunny ears on the phone by which we communicated with the 'applicable authorities.' 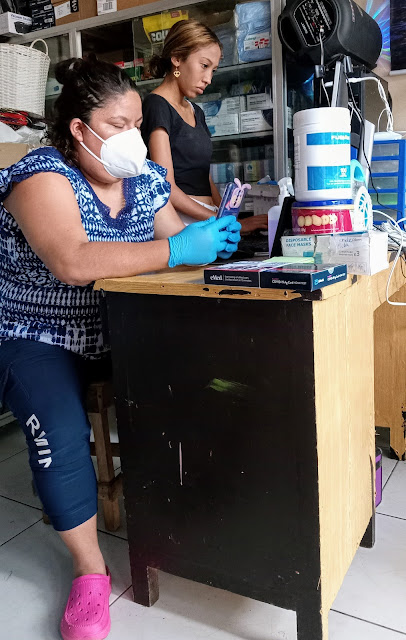 At the end of the test I gave the woman in pink shoes just $80USD. She handed me a plain folder which held two pieces of paper and on one of the pieces of paper was the word NEGATIVE.

I worried until I got to the airport the next morning, thinking that this was all too simple, that this couldn't be enough...until I found myself in line directly behind the couple who had come in to the testing place right after us - and watched them get cleared for the flight with no problem at all.

We smiled at each other