Ministry of the Environment and Natural Resources

A few years ago we decided to pursue having the beach that borders us designated a turtle sanctuary.  Several of the world's species of sea turtles nest on a Nicaraguan coast...some of them at False Bluff.

Despite existing Nicaraguan laws passed to protect turtles and their eggs, the destruction continues in large part because of economics:  turtle meat and turtle eggs are food; turtle shells are jewelry.

Over the years I have visited the MARENA office in Bluefields to talk about how to make a sanctuary designation happen...and then there was 'the pandemic' which put a temporary end to a lot of good things.

But finally, during a recent trip to Nicaragua, MARENA and I began to work out some details. The first thing was a site visit so that the 'officials' could actually see the place that we wanted protected. It was never a question of 'if' but of 'how.'

This first trip included both MARENA staff and a representative from city hall; a long walk; and a discussion of what comes first...which turned out to be taking an inventory of nest sites during the current nesting season.

My staff and I were give some good information, including drawings - right there in the sand - by the very knowledgeable city hall rep on how to recognize the difference between a turtle's exploratory visit from a visit that actually resulted in eggs being laid. The tracks coming and going across the beach are different for each of these activities.

The group from town was a bit surprised at our enthusiasm about wanting to protect the turtles that visited us...and definitely surprised that we had bothered to verify previous visits and hatchings with photographs and videos. The first visit generated enough interest on the part of the 'officials' to schedule another trip almost immediately, a trip that would include additional people and representative groups - like the army - and a possible expansion of the area to be protected.

The immediate result of our sanctuary designation will be education and a legal right to stop people from killing turtles at False Bluff and from stealing clutches of eggs. 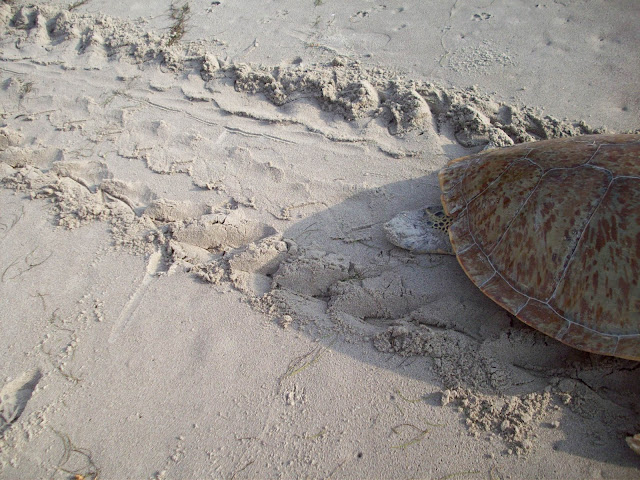 The photo does not show a turtle leaving eggs or a turtle looking for a place to lay eggs. Instead, these are the tracks of a Green Sea turtle that we freed from a tangled mess of sea garbage that had wrapped her tight and totally immobilized her.

The photo shows the tracks of a turtle making a break for freedom.

Note: The rest of the story (and additional photos) were posted here in 2011