False and not false. At False Bluff and elsewhere. Yeah, I know

One morning, walking the beach, we came across this beautiful example of a false crawl before the incoming tide washed it away.  And if this is new information to you, a "crawl" used in reference to a sea turtle, is just another way of saying "track" or "trail."

I'm guessing the turtle was a Green sea turtle looking for a place to lay eggs - because that's the variety that we've seen most at our place and laying eggs is why turtles come ashore.

A Green won't lay until she is sexually mature which is at about 20 years; and at that age she may be 4' long and up to 700 pounds...so she's going to leave marks on the beach.  You can figure all these personal details just from the fact that she left marks on the beach.

And the beach where she leaves her crawl marks - and hopefully where she lays her eggs - is the same beach she was born on.  Might not be the exact spot where she was hatched, but pretty close.

A female turtle will often 'scout' a place before laying eggs.  It's actually been estimated that about half the times a turtle comes ashore she doesn't lay eggs.  Sometimes she's interrupted in her mission to do that... and sometimes the place she's checking out doesn't meet her standards.

We're pretty sure that the female that left these tracks wasn't interrupted because....we're the only people out there and our constant presence keeps most people and four-footed predators away, especially at night, which is when turtles lay their eggs....and we're all really careful not to interrupt.

There's at least one important personal detail you can't figure out from looking at the crawl and that's - what is there about the place she visited that didn't meet her standards?  If we could figure that out we could fix it. 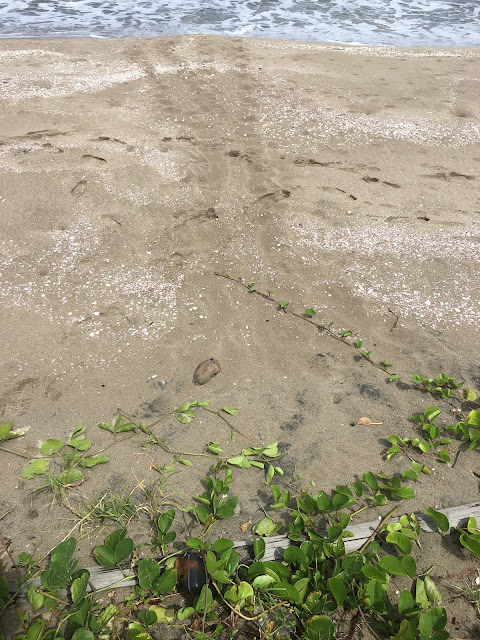 Not a false crawl - somewhere else 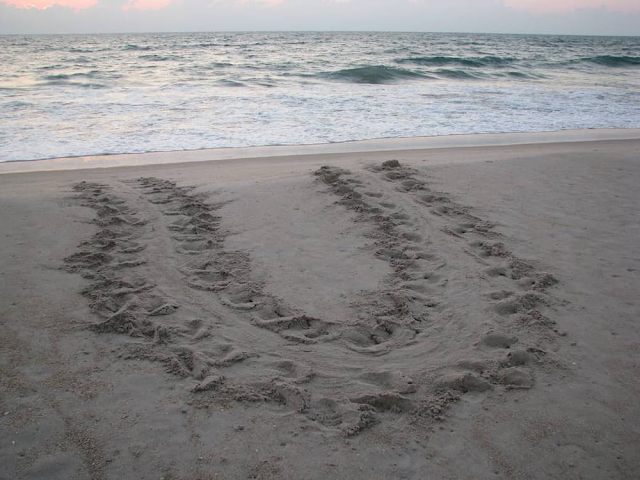