How things have changed...

During my first overnight visit to False Bluff we hung Hennessy hammocks in a clump of coconut trees right near the edge of the Caribbean.   The undergrowth was such that there was no way to move inland.

As it was, the area close to the sea was free of underbrush and the hearty breeze coming off the Caribbean kept most of the bugs away...and made a fire for meals nearly impossible. 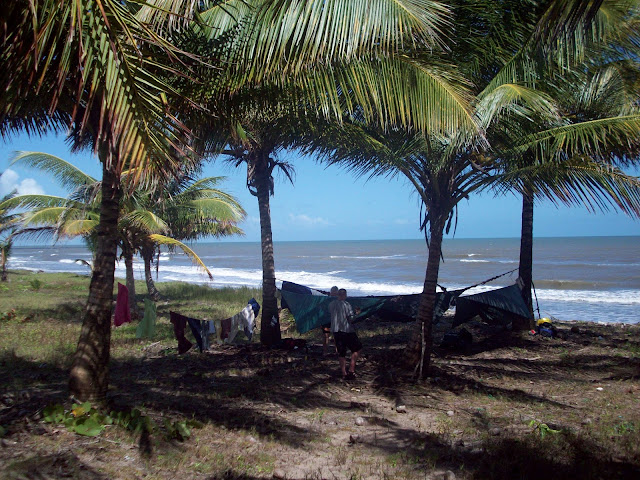 During our second day we had visitors.  At this time in our project about the only way to get to our place was to take a boat from Bluefields across the bay, out into the Caribbean, and then head north about eight miles ...and then hope we didn't capsize on the way to the beach.  Capsizing is a favorite game along much of this stretch of coast.

Or you could take a taxi-boat from Bluefields across the bay to the port of El Bluff...and then walk through El Bluff and then north about eight miles up the beach.

Or, you could hire a boat ride from Bluefields across the bay to the area that later became our canal...and then slog a couple of miles through a mangrove swamp.

False Bluff is on a narrow section of land and so traveling through the swamp had long been the chosen method for many owners of property along this stretch of beach because it was usually cheaper and always more direct.  For generations the hardy people who have subsistance farms north of us traveled to their homesteads through the swamp, carrying supplies...groceries, trees to plant, new chickens for their flocks.  There haven't been any homesteads south of us during our time, though there have been some in the past.

And one of our visitors on that first overnight camping trip was Mr. Allen who appeared out of the swamp carrying, among other things, a 4' tall breadtree seedling to plant at his place.   We all introduced outselves and talked briefly.  He didn't stay long.  Not only had he just walked 2 miles through a swamp loaded with stuff (like a small tree) but he had at least an hour more to walk up the beach to his place.

One of the best long-timers out there is Mr. Allen.  He was on - and stayed on - his farm during Hurricane Joan in the early 1980s.   Joan hit Nicaragua's coast at about 145 mph.  It was a bad hurricane and did a huge amount of damage to Nicaragua on its way to the Pacific where it became Tropical Storm Miriam.  It is unusual for a storm to survive moving from the Atlantic/Caribbean to the Pacific.

Bad hurricanes are rare in Nicaragua which is one of the reasons we chose the place.  This is a photo of damage Joan did to the central park in Bluefields...there is no photo of Mr. Allen's homestead on the coast. 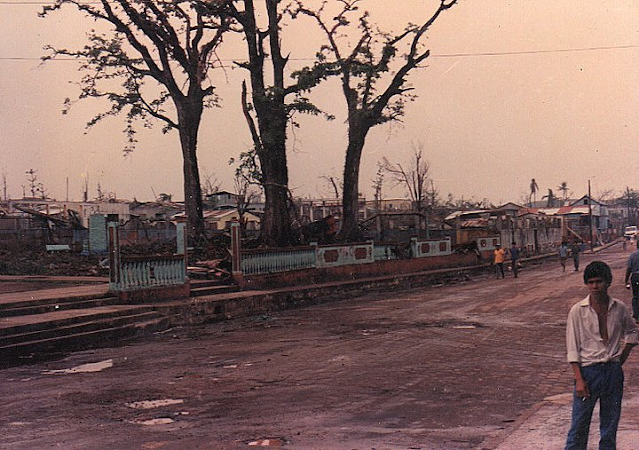 Forward to different times.  Much of the underbrush is gone, a cushion-like zoysia grass in its place, hundreds more coconut palms, and some buildings.  We no longer have to introduce ourselves.  Mr. Allen is a friendly visitor anytime he wants to stop by, sharing news and a meal or a snack. 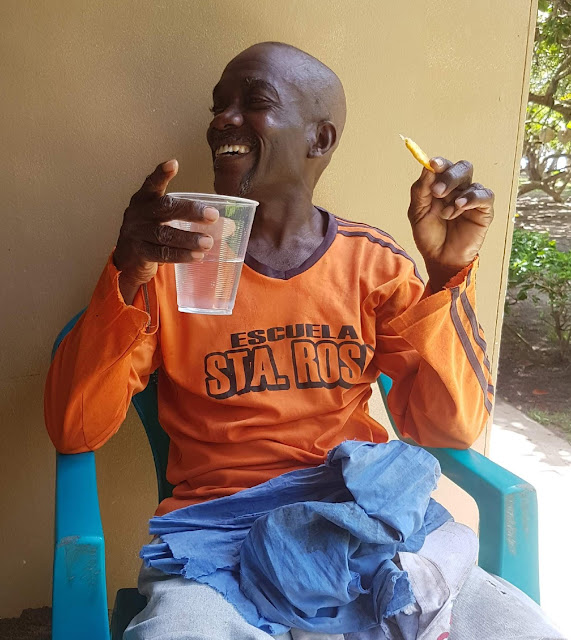