A primary concern about hospital care expressed by many who aren't familiar with Nicaragua's Caribbean coast, either the north or south autonomous region, isn't about the number of hospitals there but about the fact that most of the people who live on the Caribbean coast live in very rural areas where there are few roads and travel to a hospital can be 'difficult' and 'very difficult.'  The rural areas in the autonomous regions are usually described as "remote" or "the bush."

This population density map of Nicaragua shows just that:  population density.  But the map gives no clue as to how and where the population actually lives.  Neither of the autonomous regions is well developed and what you see from an airplane traveling to Bluefields is mostly green even though there's nothing green in this map: 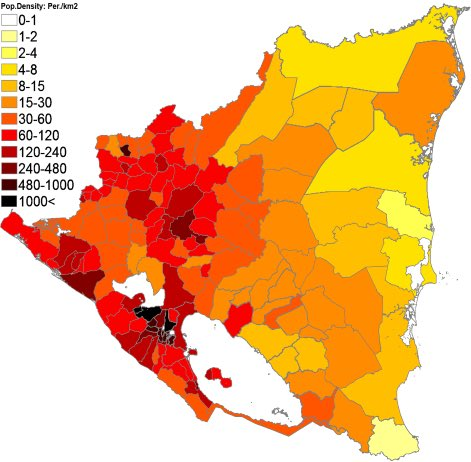 Although I've been at the Bluefields airport when a patient, attended by medical personnel, is carefully loaded into a plane for a dedicated flight, I've never gone into one of Managua's hospitals.  But now that the son of my staff family is in his third year of medical school at one of Managua's teaching hospitals - I might at least get to take a tour.

In Managua there are hospitals that rival anything we've got in the United States.  Prior to shut downs (that covid stuff) all over the world, Nicaragua had positioned itself to take advantage of "medical tourism."  There are a lot of benefits to medical tourism for both a prospective patient and for the country offering the health care.  Worth noting is that from the United States alone it is estimated that hundreds of thousands of people travel to another country every year for medical treatment.

There is more than one hospital in Managua that offers excellent healthcare.  The best known among hospitals there are the Vivian Pellas Metropolitan Hospital, Hospital Bautista, and the Military Hospital.  (The Pellas family immigrated to Nicaragua from Italy more than 100 years ago.)

The Military Hospital, which also won an award for its architectural design, is a public hospital "which accommodates everybody."  This is the hospital I really hope to tour:

Note:  As UVA (University of Virginia, USA) has worked with one of Bluefields' two universities, UNC (University of North Carolina, USA) works with the medical school in Leon, Nicaragua.